DISCLAIMER: Obviously, none of this is officially canon, and I do not claim it to be so. I do not own these characters.

MORE IMPORTANT DISCLAIMER: Pocahontas, Mulan, Jasmine, Mérida and Tiana will not be in the lineup. Most of the Disney Princesses are in Europe, or around Europe, while Pocahontas's ancestors were living in North America for centuries, ditto for Mulan but with China, and Tiana's ancestors came from Africa. Jasmine was Arabian. Mérida's parents both had Scottish accents, suggesting that they've lived there.

Right... we're going to start with Prince Eric. Lots of people are always asking, "Where are Eric's parents?" Well... take a look at the pictures below.

Prince Eric's Castle
Add a photo to this gallery
Snow White's castle and Eric's castle look pretty darn similar. They're obviously not perfect parallels of each other, and Eric's looks more modern. Now, what if Eric was Snow White and Prince Ferdinand's son? If they were his parents, it's entirely possible that they were ruling over Ferdinand's Kingdom but left Eric in charge of Snow White's, to train him to be a ruler or something. Eric would redesign the castle, and lessen the unneeded towers and add everything seen in his castle.

Prince Ferdinand... at least, I think that that's his name.

Add a photo to this gallery
So then Ariel would marry into the Snow White family, making them in the same family tree.

Right, let's skip to Aurora. Take a look at her castle and Belle's castle.

Belle's Castle
Add a photo to this gallery
Again, pretty similar. So, I'm going to say "Land of Stories: The Enchantress Returns" and go with "They're related." After all, Beauty is in both their titles. Not just that, but look at Cinderella and Aurora. Their eyes (not color) and lips are alike, and they have about the same hair color, though Aurora's is a little more golden. But if Cinderella was a commoner, then how would her ancestors be a King and Queen?

Well, Philip and Aurora had two kids in the original fairytale– Dawn and Day– and I had a headcanon theory that Eilonwy was Aurora's daughter until I found out that The Black Cauldron was a book. So that's at the least two children, and who knows how many children they had? And only one can have the King/Queen family tree, while the rest are Princes/Princesses/Dukes/Duchesses. So just keep going down the line, and you could get a commoner like Cinderella. It's also possible that that's why Lady Tremaine married Cinderella's father... she traced his family tree and found that he was descended from royalty. That could also be why we never saw the King give a fuss onscreen about Cinderella not being royalty.

But there's more! Look at Philip and Ferdinand together...

They could be related somehow, connecting these princesses in a family tree. 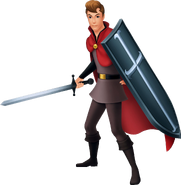 But what about the CGI princesses? How do they fit in?

Well, for starters, let's say that the Queen of Corona and the Queen of Arendelle (we're going to call them Rosemary and Idunn) are sisters. Everybody else has said this, so I'm not going to throw in a picture.

So now Rapunzel, Anna and Elsa are connected. And look at the King of Arendelle and Cinderella's father.

They sort of look alike, except the King of Arendelle has brown hair... like Cinderella's prince.

So, was the King of Arendelle, in my opinion, a descendant or ancestor of Cinderella's Prince? I personally think that he's more likely to be a descendant, but a close one, perhaps grandson, and great-great-grandson at the latest. According to Cinderella II, they have chocolate, as they can make chocolate pudding. (At least, I think they did. I try to forget that movie.) And, of course, Elsa and Anna like chocolate– possibly a family trait from Cinderella.

So there, I've connected all the Disney Princesses I said I would. What are your thoughts?

Retrieved from "https://disney.fandom.com/wiki/User_blog:Harryronhermione17/My_Disney_Princess_Family_Tree_%E2%80%93_A_Theory?oldid=1125926"
Community content is available under CC-BY-SA unless otherwise noted.