His Disney roles include a ring leader in Geppetto and a cameo appearance in Muppets Most Wanted. His song "More" was also used in one of the trailers for Wreck-It Ralph, and his song "DJ Got Us Fallin' in Love" featuring Pitbull is used in the Cars Land show DJ's Dance 'n' Drive. He was mentioned in the Austin & Ally episode "Costumes & Courage", the That's So Raven episode "Unhappy Medium", and the Shake It Up episode "Start It Up". He also made a cameo in Incredibles 2 as Frozone’s biggest fan. 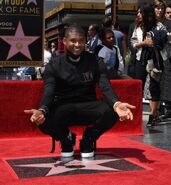 Usher at his Hollywood walk of Fame Ceremony in September 2016.

Usher attending the 2018 Sundance Film Fest.
Add a photo to this gallery
Retrieved from "https://disney.fandom.com/wiki/Usher_Raymond?oldid=4089319"
Community content is available under CC-BY-SA unless otherwise noted.