Hildy Bettin (1950-2007, her death)
Valentine "Val" Bettin is an American voice actor, who is known for using an English accent in all of his roles. For Disney, he voiced Dr. David Q. Dawson and a thug guard in the 1986 Disney animated feature film, The Great Mouse Detective. He also voiced The Sultan of Agrabah in The Return of Jafar (1994), Aladdin and the King of Thieves (1996), and the Aladdin television series (and Hamed), replacing Douglas Seale. He even voiced Archimedes Q. Porter in the Tarzan video game.

Bettin was born in La Crosse, Wisconsin. In 1948, he went to England to enroll in the Royal Academy of Dramatic Arts and graduated in 1950. There he met his wife Hildy. They returned to the United States in order for him to become a drama teacher in Iowa.

He has acted in a variety of mediums, notably films like Somewhere in Time, The Man Who Wasn't There, Voices Within: The Lives of Truddi Chase, Entertaining Angels: The Dorothy Day Story, and Shrek as well as television show like Mork & Mindy/Laverne & Shirley/Fonz Hour, Webster, Great Scott!, and W.I.T.C.H. 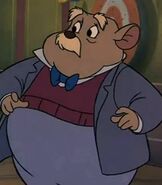 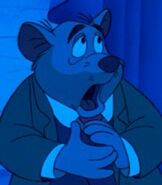 The Sultan
(The Return of Jafar, Aladdin and the King of Thieves, and Aladdin: The Series)

Val Bettin and Barrie Ingham behind the scenes of The Great Mouse Detective
Add a photo to this gallery
Retrieved from "https://disney.fandom.com/wiki/Val_Bettin?oldid=4543893"
Community content is available under CC-BY-SA unless otherwise noted.