“Everybody knows when a Toon's in trouble, there's only one place to go: Valiant & Valiant!”
―Roger Rabbit

Valiant & Valiant is a fictional Private Investigation Agency featured in the film Who Framed Roger Rabbit. Its office is located in an apartment building in Los Angeles. It is also an apartment with a kitchen and living space.

Eddie Valiant and his brother Theodore "Teddy" Valiant, joined the police force and graduated from the LAPD in 1925. They eventually started their own private investigation service, Valiant and Valiant, in 1934, working largely on Toon cases, such as the kidnapping of Donald Duck's nephews in 1937 or clearing Goofy of accusations of espionage for the Axis Powers in 1940 during World War II.

Valiant & Valiant was reduced to just one Valiant after Teddy was killed on duty by a mysterious toon and the business began to go downhill. Eddie found it hard to cope with Teddy's death, he turned to drinking and developed a lack of trust in toons. The place became dusty and shabby with all of Teddy's things left untouched on his desk. Sometime later Eddie was called upon to investigate a possible affair between Marvin Acme and Jessica Rabbit (wife of comedy star Roger Rabbit) by R.K. Maroon, the owner of Maroon Cartoons and Roger's boss.

Eddie wasn't pleased to doing a case involving toons but needed the money to pay off a tab at his girlfriend Dolores' bar, located across the street from where his business was located. He hangs around Jessica's gig at the Ink and Paint Club and takes pictures of her and Acme playing patty-cake.

Later, he was called in to the Acme factory because Acme was killed on the very same night that Roger found out about Jessica, and the LAPD believe that Roger is the prime suspect based on evidence found at the crime scene.

Baby Herman, Roger's friend and cartoon co-star, came to tell Eddie that Roger was framed and that he should help clear his name, but Eddie refused. He also told him that Acme had left a will of their home Toontown to the toons, but it was never found.

He pulled down his bed and decided to take 40 winks, but Roger was there on the run from the Toon Patrol led by the sinister Judge Doom who were in charge of justice in Toontown.

Roger pleaded with Eddie to help him, saying he was innocent and was charged with a crime he didn't commit. Eddie managed to hide him when the Toon Patrol came to search the premises.

Before discovering Roger in his office/apartment, after looking over a picture of Acme and Jessica with a magnifying glass, Eddie found out that Baby Herman had been right all along about the will. It was later discovered that Acme had used disappearing-reappearing ink on the paper to write out the will, which Roger had innocently used to write Jessica a love poem, so Toontown rightfully belonged to the toons.

After killing Judge Doom, who was responsible for Acme and Maroon's murders as well as Teddy's death, Eddie was finally now at peace and it assumed that he went back to taking toon cases and the business became successful again. 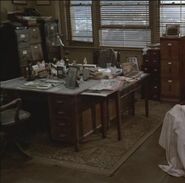 Photo of Eddie and Teddy with Dolores outside the building.