The Avengers: Earth's Mightiest Heroes
Guardians of the Galaxy
Loki (archive footage)
What If...? (cameo)

Hela, her past, losing her friends, villains, being told what to do

“I've spent years, in a haze, trying to forget my past. Sakaar seemed like the best place to drink, and to forget, and to die. One day.”
―Valkyrie[src]

Valkyrie is a Marvel Comics character who appears in Thor: Ragnarok, played by Tessa Thompson. As her name indicates, she is a valkyrie from Asgard, and a friend of Thor, often helping him defeat the forces of evil. Valkyrie was created by Roy Thomas and John Buscema.

Millions of years ago, Brunnhilde and the Valkyries were Asgard's strongest warriors, with even Thor and Loki looking up to them. After Odin had been forced to banish his daughter Hela due to her destructive nature, she attempted to escape from Hel. Odin dispatched the Valkyries to combat her and prevent her from escaping. Unfortunately, Hela was far too powerful and slaughtered all of the warriors while Brunnhilde could only watch helplessly (including her lover). However, though her efforts enabled Odin to retrap Hela, Valkyrie became disillusioned with Odin and Asgard, and horribly ashamed by her failure and the deaths of her fellow warriors, therefore she exiled herself to the planet Sakaar. There, she found a new job as a bounty hunter working for the Grandmaster, capturing warriors or other beings who landed on Sakaar and bringing them to him so they could participate in his gladiatorial matches, the Contest of Champions. Favored by the Grandmaster, and forming a rivalry with Topaz, Brunnhilde spent her earnings on alcoholic beverages to drink and forget about her past. When the Hulk had ended up on Sakaar and became the Grandmaster's new champion, she developed a combative friendship with him.

Over the course of two years, in the coming of Ragnarok, Odin had passed away of old age and enabled Hela to finally escape. Her brothers Thor and Loki had attempted to escape from her and were thrown across the universe and landed on Sakaar. Upon landing, Thor was ambushed by a group of Scavengers who intended to eat him. However, Brunnhilde flew in on her ship and intercepted, drunkenly proclaiming he was her claim. After struggling to stand up, she used her ship's weapons to kill the scavengers and shot a Control Disk into Thor, tasing him into submission and brought him back to the Grandmaster's tower. There, Grandmaster observed Thor and decided he'd be a perfect contestant. While she bought a case of drinks at the bar, Thor had noticed her tattoo and expressed his admiration of the Valkyries, but Brunnhilde was uninterested in what he had to say and left. When the match occurred between Thor and Hulk, Brunnhilde watched the fight from her ship. Surprised as everyone else when Thor announced that he knew Hulk, but was amused as they both fought. However, when Thor briefly unlocked his true godly powers, she was intrigued as he nearly overpowered and defeated Hulk, but thanks to the Grandmaster's sneaky intervention, Thor was electrocuted and defeated by Hulk.

“I can't turn away anymore. So... if I'm gonna die, well... it might as well be driving my sword through the heart of that murderous hag.”
―Brunnhilde to Thor and Bruce[src]

Following this, she came to visit Hulk. Thor, who was the champion's roommate, once again attempted to relate to her, but she sarcastically stated that she'd listen while chugging down a whole bottle of whiskey. Thor was disappointed she no longer cared about Asgard, and she left with Hulk. The next day, when she came to spar with Hulk again, Thor managed to snag her Disk remote and removed it, before attempting to escape via the Quinjet Hulk arrived in. However, when Hulk went to stop him, he finally reverted back into Bruce Banner. Eventually, Brunnhilde finally reconsidered and decided to assist Thor. She helped him and Banner in escaping Sakaar, as well as fighting Hela on Asgard. She then escaped with Thor, Banner, Loki, and the Asgardians on the Statesman and witnessed Ragnorak.

Although Valkyrie didn't appear in the film, she evacuated half the Asgardians, with Korg and Miek, away from Thanos' attack on the Statesman.

In 2018, Valkyrie had managed to lead the surviving Asgardians to Earth and they settled their new home in Norway, in a place they called New Asgard.

In 2023, Valkyrie was visited by Banner and Rocket Raccoon who came to see Thor. Later, she and the Asgardians were transported by the Masters of the Mystic Arts to assist the Avengers in the battle against an alternate timeline's Thanos and his army. Afterwards, Thor decided to leave Earth and made Valkyrie the King of New Asgard. 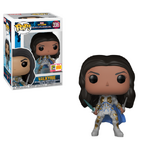