Disney Wiki
Register
Don't have an account?
Sign In
Advertisement
in: Locations, Frozen locations, Once Upon a Time locations, Disney Magic Kingdoms

Still standing
The Valley of the Living Rock is a major setting in Disney's 2013 animated feature film Frozen. It is inhabited by trolls, including Pabbie, Bulda, Cliff, and many others.

Its name likely references the trolls' ability to transform into rocks at will.

The Valley is known to King Agnarr and Queen Iduna. Both of them have heard of mystical trolls and their powers, so they travel to the Valley in order to heal their younger daughter Anna.

The "Fixer Upper" sequence takes place in the Valley when the trolls attempt to wed Kristoff and Anna.

The valley appears in the ABC show Once Upon a Time in the season 4 premiere "A Tale of Two Sisters". Anna and Elsa visit the valley to speak to Grand Pabbie to find out more about their parents. 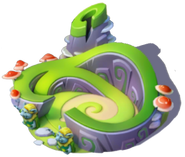 Troll Knoll (of the valley) in Disney Magic Kingdoms