Disney Wiki
Register
Don't have an account?
Sign In
Advertisement
in: Characters, The Nightmare Before Christmas characters, Animated characters,
and 16 more

Disappeared
Vampire Teddy or Scary Teddy is the teddy bear seen in Tim Burton's The Nightmare Before Christmas.

The vampire Teddy was made during the "Making Christmas" sequence to be one of Jack Skellington's macabre Christmas presents. The teddy was created by the corpse dad, the wolf man and the devil of Halloween Town.

Jack Skellington gives him and an undead pull toy duck to a pair of children when he gives presents to the little kids in the real world. The toys both come to life and start chatting the children. Near the end of the movie, Santa Claus comes and replaces the vampire teddy with a teddy bear that isn't scary like the previous one. He does the same with the other toys that Jack delivered.

The vampire teddy appears in the game as an enemy called "Trick".

The vampire teddy is a playable character in this mobile-app based game.

In both versions of Haunted Mansion Holiday, you can see him at the start of the ride. In the California version, he is first seen sitting on top of a stack of presents. He is also in the séance room sitting behind Madame Leota. Next, he appears in the graveyard blowing a trumpet before guests enter the crypt to see Oogie Boogie. Finally, he appears above guests as they make the descent into the graveyard, chewing on the lights. In the Tokyo version, he is seen playing a piano to the tune of Haunted Mansion Holiday Nightmare's loading music ("Kidnap the Sandy Claws"). He also appears above the entrance to the crypt just like in the California version, and in one of the portraits in the stretching room. 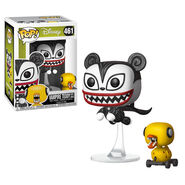 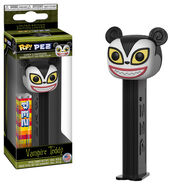