Vampirina Ballerina from the books by Anne Marie Pace

Wolfie (dog)
Penelope (plant)
Vampirina "Vee" Hauntley is the main protagonist of the Disney Junior animated series Vampirina. She is a young vampire whose family moved from Transylvania, Romania to Pennsylvania to open a local Scare Bed n' Breakfast.

Vampirina used to live in Transylvania with her parents, Demi, and Gregoria, where she lived a comfortable life and was popular at school. However, things changed when she and her family moved to Pennsylvania so her mother could achieve her dream of opening a B&B for traveling ghouls and monsters. While Vee was excited about the move, she also felt nervous about fitting in with humans, especially after the B&B scares away the first human they meet, Edna Peepleson. Luckily, she managed to befriend her new neighbors Poppy Peepleson, Edgar Peepleson, and Bridget. Poppy soon finds out about her identity as a vampire, but accepts her for her differences, and they become best friends. Bridget later finds out too, and while scared at first, also learns to accept her. Vee keeps her identity a secret from Edgar, however, since he likes to film supernatural things and upload it to his web show, which could prevent Vee and her family from living a quiet life.

Vampirina is a young vampire with periwinkle skin, pointy ears and fangs. Her hair is black with bat wing pigtails and has violet eyes. She dresses in a light magenta top and black dress with a spider web pattern, wears two blue fingerless gloves, and black boots. Even though she appears 8 years old, she is actually 200 years old.

When she is being a Woodchuck Woodsie, she formerly wore her Ghoul Guide uniform although a blue sash was worn to put some badges in "Woodchuck Woodsies". But in "The Woodsie Way", she wore a new, more accurate uniform.

At bedtime, she wears two-tone purple pajamas with a blue ghost on the front. Her sleeves and pajama pants have blue bat patterns all over, and wears purple bat slippers.

Like all vampires, Vee is very playful and can transform into a bat. However, when she gets shy and nervous she gets a case of the Battys, which is transforming back and forth into a bat uncontrollably. Also like all vampires, Vee can move very fast. She can instantly zoom from one place to another in a second without needing to speed up or slow down. She also has super hearing that makes things far away sound loud and clear. As seen in "Vampire Weekend", mastering all the abilities of a vampire is challenging, and requires a lot of concentration. 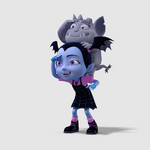 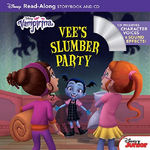 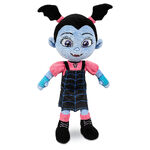 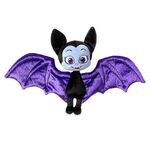 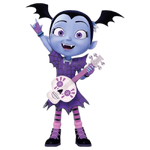 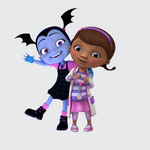 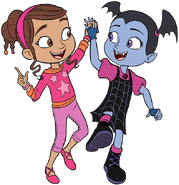