To honor and recognize Ralph and Vanellope's friendship

Niceland, Fix-It Felix Jr. (Ralph's half)
Slaughter Race, Internet (Vanellope's half)
Vanellope's medal is a key object in Disney's 2012 animated feature film, Wreck-It Ralph and its 2018 sequel. It is an edible, homemade medal created by Vanellope von Schweetz as a gift to Wreck-It Ralph.

The medal is a heart-shaped cookie. Its back has a chocolate surface which reads To Stinkbrain while its front is decorated with sprinkles and reads, You're my hero. The medal is affixed with a pink ribbon coated in sugar.

After Ralph helps Vanellope to create the Candy Kart, she uses the confectionery substance of Sugar Rush to create a medal in the event that Ralph cannot reclaim the Medal of Heroes. This is due to how much having a medal means to Ralph. Ralph accepts the medal, but due to King Candy's instigation (made possible in part by returning Ralph's Medal of Heroes), is coaxed into destroying the kart in an effort to protect Vanellope. With Vanellope heartbroken, she runs off, leaving Ralph to return home with both his medals at hand.

In Niceland, Ralph realizes the trouble his efforts to obtain the Medal of Heroes has caused and discards it. He then pensively looks to Vanellope's medal and clutches it, just before making a shocking discovery about his friend's backstory.

Towards the end of the movie, when Ralph sacrifices himself to save Vanellope from the Cy-Bugs, he plummets towards Diet Cola Mountain and recites the Bad Guy Affirmation. In during which, he clutches onto the medal as a final gesture just before being rescued by Vanellope.

Following the events of the film, it is shown that Ralph continues to wear the medal and cherishes it deeply as a symbol of his friendship with Vanellope.

When Ralph and Vanellope go to the Internet so they could save Sugar Rush, Ralph brings the medal with him. During their time there, Vanellope breaks it in two when she learns that Ralph placed a virus in Slaughter Race in an attempt to keep her from staying there and leaving him. As Ralph goes to look for it and is upset with the damage to both the medal and his friendship with Vanellope, the virus scans Ralph and creates an army of Ralph's that are filled with his negative emotion. After the duo stopps the virus Ralph clones, the broken medal becomes a friendship necklace, as Ralph wears one piece of it while Vanellope wears the other half. When the two hug each good bye, the two halves sat closely together, making it look whole again.

Ralph with his half

Vanellope and Ralph wearing their halfs of the medal

Vanellope wearing her half 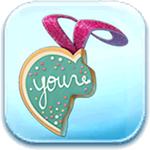 Ralph's half of the medal in Disney Magic Kingdoms 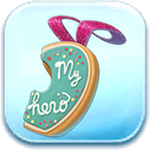 Vanellope's half of the medal in Disney Magic Kingdom