Andrew Kishino (2001-2007)
Vanessa Marshall is an American voice actress, actress, singer, and model. She is well known for several voice roles such as Irwin in Cartoon Network's The Grim Adventures of Billy and Mandy.

For Disney, she voiced Nani Pelekai in the video game Lilo & Stitch: Trouble in Paradise (filling in for Tia Carrere), and Nala in the video games The Lion King: Simba's Mighty Adventure and Kingdom Hearts II (filling in for Moira Kelly). She also voiced Hera Syndulla in the animated series Star Wars Rebels and Star Wars: Forces of Destiny and Rook Kast in Star Wars: The Clone Wars.

She also voiced Black Widow, Viper, and Anaconda in The Avengers: Earth's Mightiest Heroes, Mouse in Fish Hooks, and Captain Miriadel of Meridian in W.I.T.C.H..

Nala
(In video games related to The Lion King) 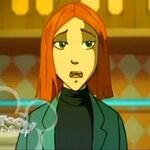 Vanessa Marshall attending the Star Wars Rebels Season 2 finale in May 2016.
Add a photo to this gallery
Retrieved from "https://disney.fandom.com/wiki/Vanessa_Marshall?oldid=4035993"
Community content is available under CC-BY-SA unless otherwise noted.