Williams's first major film role was as the star of the feature film, Eraser in 1996. She also starred in the movies Soul Food, Dance with Me, The Adventures of Elmo in Grouchland, Shaft, and Johnson Family Vacation. From 2006 to 2010, she played the role of the scheming, self-absorbed diva and former supermodel Wilhelmina Slater in the ABC comedy series Ugly Betty, for which she received three Emmy Awards nominations. In 2009, Williams released her eighth studio album, The Real Thing. From 2010 to 2012, she starred in Desperate Housewives as spoiled rich woman Renee Perry. She starred in the supernatural drama series 666 Park Avenue in 2012.

For Disney, she recorded "Colors of the Wind", the Oscar-winner for Best Original Song from the Disney animated feature film, Pocahontas, which reached No. 4 on the Billboard Hot 100. She also sung it at the 1996 Academy Awards. She also was the narrator in A Poem Is..., Vita in Hannah Montana: The Movie, The Stewardess in the Phineas and Ferb episode, "Where's Perry?", and Debra Williams in the Proud Family episode; "Ain't Nothing Like the Real Thingy, Baby". She even hosted Dreams Come True: A Celebration of Disney Animation and appeared as herself in the 2005 and 2008 Walt Disney World Christmas Day Parades.

On November 13, 2011, a promo for the following episode of Desperate Housewives (serving also as a teaser for The Muppets), showed her fighting with Miss Piggy over Kermit the Frog on the set of ABC's dramedy. She also voices Elieen Underwood in Milo Murphy's Law, Delilah in Doc McStuffins, and Captain Beakman in T.O.T.S.. 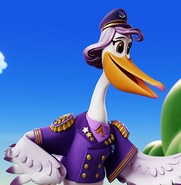 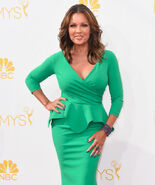 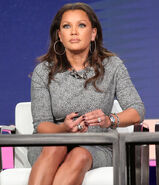 Vanessa Williams speaks at the Daytime Divas panel at the 2017 Winter TCA Tour.
Community content is available under CC-BY-SA unless otherwise noted.
Advertisement