“Magic?! I do not work with magic! I mean, technically it's not magic, it's alchemy. But yeah, don't sweat it.”
―Varian, introducing himself to Rapunzel

Varian is a young alchemist who appears as a recurring character in Tangled: The Series. He later serves as the main antagonist for the latter half of the first season.

Varian is an intelligent scientist, inventor, and alchemist. He does not believe in magic and tends to solve problems through scientific means. However, his experiments were confused as magic, which makes others believe that he is some kind of wizard. He has good intentions and wanted to make his father proud of him for his creations. He has heard about the princess' hair along with his father and the villagers and also shows respect to the royal family, as he bows to Rapunzel and calls her princess until he was told to just call her Rapunzel. Despite his intellect, he is pretty naïve and sometimes overlooks his plans and inventions. While he has a gift of inventing and alchemy, his creations usually backfire and cause more mayhem than good.

Besides inventing and alchemy, he enjoys reading about the adventures of Flynn Rider. He became his biggest fan for his bravery and combat skills, but the excitement of his hero had him confuse Eugene Fitzherbert as Flynn Rider when Eugene used the name in his life of crime. He quickly trusts Eugene with his secret hot water machines and tries to assure him that it's under control when Eugene expresses his concerns about how unstable the machines really are. When the machines start to cause mayhem, he did try to turn them down but nearly got hurt in the process. After his home and village fell to the ground and the machines got destroyed, he shows regret for his actions and for letting his father down.

The events of "Queen for a Day", however, have left Varian hurt after his dad was encased in a crystal he accidentally formed out of the black rocks and his heart filled with rage and an obsession for revenge after feeling betrayed by Rapunzel turning her back on him during his time of need; as well an urge to save his father. Varian's dark turn left him a much more selfish person, focused on proving himself able to save his father, even at the expense of others. Despite Rapunzel's attempts to make amends with Varian by aiding him to get the Sun Drop Flower, Varian betrays Rapunzel as soon as he gets what he wants from her. Even when Rapunzel tried to heal Varian's heart with her apology and promising to help him save his father, the barriers that Varian placed around him, so he wouldn't get hurt the same way again, prevented him from listening to reason.

Varian also proves himself to be capable of being ruthless in achieving his goals, manipulating and attacking people if necessary. After stealing the sun drop failed, Varian sets out to force Rapunzel into helping him free his father by means of assaulting the kingdom, only to fail.

Even after learning that not even Rapunzel's hair could help him free his father, Varian remains committed to making his father proud of him, no matter what it takes.

In his anger, Varian has shown his abusive side by transforming his pet raccoon, Rudiger, into a monster against his will.

When Rapunzel and Cassandra first met him, he was wearing a black and gray coat and a gray bauta, which makes his eyes appear to be glowing a yellow-green color and makes his voice sound intimidating.

During a blizzard in "Queen For a Day", he wore a brown coat with a two grayish-brown colored cloak with a white fur-lined hoodie, a black belt, and a red scarf.

In his debut appearance in "What the Hair?!", Cassandra enlists Varian's help in solving the mystery of Rapunzel's hair. At first, he was thought of as a wizard with magical abilities. But Rapunzel and Cassandra learned that Varian is actually an alchemist who doesn't believe in magic but is a man of science. At the same time, he reveals that he's a huge fan of Flynnigan Rider, confusing Eugene as him, and willingly told Eugene that he has been working on a machine that will give his village hot running water. However, he fails to realize that his creations are unstable and causing a lot of earthquakes from beneath his village, resulting in all his work blowing up, at the same time disappointing his father, Quirin.

He appears again in "Great Expotations", where he comes to the Exposition of Sciences event with his latest invention. He had just considered Cassandra as his friend as he calls her "Cassie" and is willing to help her with her duties as Lady-in-waiting in exchange for having her help him with his invention as his assistant. He also apparently has a crush on her from the way he asks Rapunzel and Eugene if Cassandra is going to be at the event when he presents his new invention. He uses alchemy to help Cassandra clean up the castle and set up the event. However, when Cassandra got sidetracked by becoming a guard and personal escort to the fair's judge, Dr. St. Croix, Varian was forced to substitute Shorty instead, but the thug nearly caused St. Croix's nose to be lanced. Furthermore, St. Croix only cared if Varian had a reliable assistant to give his invention flair and had him passed over for first place in favour of Fernanda Pizazzo. This depressed Varian, who was subsequently comforted by Cassandra. Unfortunately, St. Croix tampered with his invention, causing it to go haywire, which, combined with Pizazzo's invention, created a powerful vortex. Cassandra chose to protect Varian over St. Croix, which pleased the former. With the aid of Rapunzel's Megadrive powered in reverse, Varian was able to reach the device and shut it off. As St. Croix was carried away on a stretcher, Cassandra awarded Varian with the first prize ribbon. In gratitude, he showed Rapunzel and Cassandra the black, spiky rocks, which had grown near Old Corona and shows a reaction when Rapunzel stands near them. Rapunzel asks Varian to help them figure the mystery of the rocks and keep it a secret, to which he agrees.

Varian plays a major role in "Queen for a Day". When black rocks start growing and destroying everything, Varian wants to find a way to stop them from destroying anything else, but Quirin tells him to stay away from them. Varian then went with his father to see the King to tell him of the situation. Upset when his father instead lies to the king about the rocks, Varian tells Rapunzel the truth. He then decides to take matters into his own hands and works on finding a way to remove the rocks with alchemy. When Quirin finds out what Varian was doing, Varian admonishes him for trying to run away from their problems. But then, Quirin pushes Varian away from being trapped in a growing crystal, made by one of Varian's attempts on using a chemical on the rocks. Varian runs to Rapunzel to get her help but, with her people in the crisis of the upcoming snowstorm, she was unable to help him and lets him be dragged out by Pete and Stan. Varian returns home and finds his father frozen in solid amber. In tears, he vows to find a way to save him and, feeling betrayed by Rapunzel's inability to help him, make everyone who turned their backs on him pay.

He returns in "The Alchemist Returns", where he seemingly forgives her and convinces Rapunzel to help him steal the Magical Golden Flower. Rapunzel agrees to help him only because he said "it was for Corona". He later confesses that he used Rapunzel to get to the flower, and he only did this to save his dad and not the kingdom. This was part of his revenge on everyone who turned their backs on him. Rapunzel pleaded with him to let her help him and promises to free his father. For a moment, Varian regretted his actions and considers trusting before he heard the door being opened, which made him change his mind and proclaimed he no longer trusted Rapunzel, believing she cannot keep promises. He then escapes in a purple cloud of fog. Rapunzel is heartbroken, now that she realizes she was used by Varian whom she trusted deeply. Later, in his alchemist lab, Varian tries to free his father from the rocks with the flower, but it does not work, much to his anger and frustration. Remembering back from his conversations about the black rocks and the flower, he then realizes the heart-throbbing truth: the flower was not the sun drop anymore, Rapunzel was.

Varian once again plays a major role in "Secret of the Sun Drop", launching an assault on the castle with a hidden automaton amongst Rapunzel's birthday gifts. Rapunzel, Cassandra, and Eugene quickly find out how to deactivate the automaton, but the surprise assault leaves King Frederic fearing for Rapunzel's safety, ordering her to be under maximum security. The same night, Varian once again launches another assault on the kingdom, this time facing a giant and aggressive Rudiger under influence of a serum. The guards successfully protect Rapunzel (who had broken out of the castle) from harm, and Rapunzel in hand assists the guards to eventually capture Rudiger, who returns to his normal size after being captured in Rapunzel's hair. Unfortunately, the attack turned out to be a distraction, letting Varian easily infiltrate the castle and kidnap Queen Arianna, but not before leaving half of the guards (including the captain) wounded after the attack and the kingdom terrified over the black rocks growing all over the kingdom. After the kingdom realizes what had happened, a full-scale counterattack on Old Corona, now surrounded in black rocks, is organized.

Rapunzel and King Frederic decide to sneak in to Varian's home separate from the kingdom army to sneak out the Queen. Unfortunately, he had planned ahead, and traps Rapunzel and the King, while launching an army of automatons on the kingdom's forces. Varian reveals his plot of kidnapping the Queen as simple bait to lure Rapunzel to him. Varian threatens to encase Queen Arianna in the same amber his father was trapped in if Rapunzel didn't give him her hair to free his father.

Much to his heartbreak, Rapunzel's hair doesn't work against the amber, and the kingdom's forces defeat the automatons, the plan failed. Varian, devastated that he no longer knows how to save his father anymore, lashes out his anger on Rapunzel by controlling a giant robot, bent on still having revenge on Rapunzel. He grabs Cassandra in the robot's metal hands and sadistically taunts her on his former crush on her. When Queen Arianna orders him to stop, he grabs her too and starts to crush them both. In a moment of revelation, Rapunzel realizes how her sun drop energy can control the black rocks. Varian violently charges toward Rapunzel in anger, only to get his robot destroyed by Rapunzel through the black rocks, much to his fury.

Defeated, Varian is arrested by the castle guard. Varian, as he and Rudiger get taken away, swears that he will still make his father proud. However, under Rapunzel's urge, the king assures Varian will get the help he needs.

He made a cameo appearance in "Happiness Is..." as a vision created by the idol, threatening to use Frederic for experiments.

Helping Cassandra out with her work

Baby Varin with his family

Varian crushes the flower into powder, when he realizes that its magic's gone 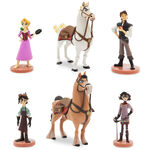