Levi: "If we bring more snacks from home and sell them, we can make the money in no time."
Nia: "Guys, selling stuff at school for profit is against the rules. So keep your voices down, we don't want anyone to know what we're doing."
―Booker and Nia

"Vending the Rules" is the eighth episode of the first season of the Disney Channel series Raven's Home. It aired on September 15, 2017. It was written by Molly Haldeman & Camilla Rubis and directed by Bob Koherr.

When Booker and Levi want expensive virtual reality goggles, the boys come up with a plan to make money by selling snacks at school, even though it is against the rules. Despite his friends’ protests, Levi thinks that using his father’s methods of getting money will make the job worthwhile. When the kids get caught, Chelsea snaps at Levi by telling him that he’s gonna end up like his father, which causes Levi to run off crying. Chelsea goes into Levi’s room to apologize for hurting his feelings, and explains to Levi how his father did bad things that tore their family apart, but she doesn’t hate him because he’s what brought Levi into her life. The two reconcile and agree to be open with each other from now on, even though Levi is still on punishment. 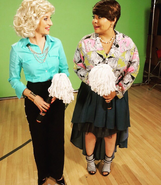