Mr. Schwartz † (husband)
Vera Groober-Schwartz is a recurring character from the animated TV Series Pepper Ann. She is the secretary to Principal Hickey at Hazelnut Middle School and offers occasional advice and aid to Pepper Ann Pearson at unexpected times.

Vera Groober-Schwartz' life is somewhat left in the dark. All that is known is that she spend years collecting things for special events, but ultimately found that her house has been overrun with useless junk. Since then, she has tried to live her life to the fullest. Despite this, she is shown to have resigned herself to being a secretary at a middle school, run by a somewhat dimwitted principal. Vera occasionally, finds herself helping out Pepper Ann and has found her life intertwined with her on occasion, such as when she taught her that people need to embrace life in "The Velvet Room". In "Spice of Life", it is revealed that Vera's mother is 114-years-old and passed away. Supposedly, she was always telling her "would it kill you to be nice?" which Pepper Ann also told her before her passing.

In "The Finale", it is established that in the series' version of 2013, Vera, who is revealed to still be alive, has retired and has opted to continue to remain that way in the Bahamas without attending the middle school reunion.

At first glance, Vera comes off as being somewhat aloof and possibly cynical about her position. In actuality, she is very positive and shows traits of being wise. She can also be very comforting when put in a position to act as such. It is possible that she was just like Pepper Ann at one point, as she seemingly knows what to say to her about the subject at hand. Being in her twilight years, she is also not afraid to be vocal about having time to herself, which she manages to acquire by the end of the series.

Vera is a short statured, yet skinny woman with slightly greyish skin, grey hair held up in a bun, flattened glasses that are held up by beads and red lipstick. She wears a long blue gown with a white collar, a pink sweater that is wrapped over her shoulders and pink slippers. 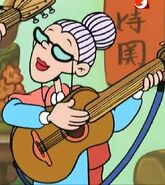