Shaft and other blaxploitation films

Black superhero with chest hair; wears sunglasses and a red and blue suit with a white V on it.

"Hey kids, want to see me use my verb vision?"

Verb is the lead character in the in-universe movie Verb: The Movie. He can "take a noun and bend it" and according to the song, doesn't know his own power. He also has an affinity for baseball, as seen when he turns the noun "bat" into the verb "batting" and when he hits a home run in a baseball game near the end of the song.

His super powers include flight, super strength and "verb vision" that turns nouns into verbs (the latter two demonstrated in the Grammar Rock PC game.)

He is notable for being a bit inexperienced as a superhero; for example, he uses his cape to cover himself up when it's raining instead of letting himself get wet like most seasoned heroes would do, and crying when he fails in the PC game. 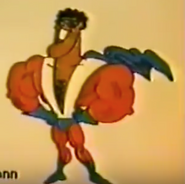 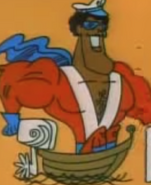 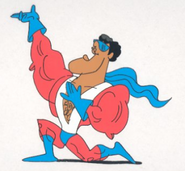 Retrieved from "https://disney.fandom.com/wiki/Verb?oldid=3884700"
Community content is available under CC-BY-SA unless otherwise noted.