“Hope is like the sun. If you only believe in it when you see it, you'll never make it through the night.”
―Amilyn Holdo[src]

Vice Admiral Amilyn Holdo is a major character from Lucasfilm's 2017 Star Wars saga film The Last Jedi, the second film of the sequel trilogy, as well as Claudia Gray's novel Leia, Princess of Alderaan and a number of Star Wars comics. She is portrayed by Laura Dern and serves as a Vice Admiral in the Resistance during its conflict with the First Order. Following the Hosnian Cataclysm, she helps General Leia Organa lead the Resistance.

She is an eccentric yet intelligent and competent member of the Resistance. Hailing from Gatalenta, she is experienced in the spiritual and esoteric practices of her planet, such as astrology and skyfaring (a type of meditation). Holdo has a tendency to speak in riddles and metaphors, and Leia refers to her speech patterns as "Holdo speak".

Holdo is slender and tall woman with fair skin and blue eyes. She dyes her hair bizarre colors, often goes barefoot, and wears vibrantly colored clothes. In The Last Jedi, she is seen with short purple hair and wearing a long dress of the same color.

“We are the spark that will light the fire that will restore the Republic.”
―Amilyn Holdo[src]

After the Battle of Starkiller Base, Vice Admiral Amilyn Holdo takes part of evacuation of D'Qar boarding on her Free Virgillia-class Bunkerbuster Ninka. However, the First Order arrives leading Poe Dameron to engage them destroying the Mandator IV-class Siege Dreadnought Fulminatrix to buy the Resistance to evacuate. Unfortunately, all of their bombers are been destroyed including Paige Tico's bomber and Poe is demoted to captain by General Leia Organa for disobeying her orders.

Shortly after the First Order tracked them through hyperspace, she becomes acting leader for the Resistance due to Leia Organa getting injured from gettling to pulled into the vacuum of space by her son's wingmate Poldin LeHuse who was then shot down by her ship. Poe leads a mutiny against her, but is stunned by a recovered Leia who then proceeds her plan to evacuate the crew from the MC85 Star Cruiser Raddus to Crait. However, the First Order learns of their plan having revealed to them by DJ who helped Finn and Rose Tico board the Mega-class Star Dreadnought Supremacy to disable the hyperspace tracker.

The Supremacy begins to fire the transports as they approach Crait, and Holdo turns the Raddus around toward the Supremacy and sets its course to a kamikaze attack. She activates the hyperdrive through the Mega-Destroyer, crippling it, destroying twenty Resurgent-class Star Destroyers and saving Finn and Rose from getting executed by Captain Phasma.

Amilyn Holdo in the comic Age of Resistance Special 1. 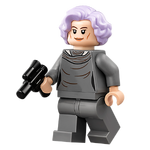 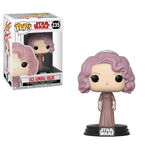 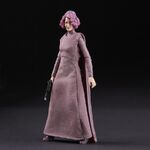