Courtney Schultz
Garrett Schultz
Vicki Ann Lawrence is an American actress, voice actress, comedian, and singer. She is perhaps best known for the many characters she originated on CBS' The Carol Burnett Show, where she appeared from 1967 to 1978, for the entire series run. One such character, The Family matriarch Thelma Harper/Mama, would later be the central character of the television situation comedy series Mama's Family on NBC, and, later, in first-run syndication.

For Disney, she voiced Granny Rose in The Fox and the Hound 2 and Hildegard Johnson in Phineas and Ferb. She most recently played Mamaw in Hannah Montana. 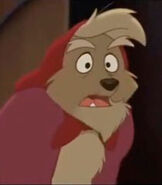 Granny Rose
(The Fox and the Hound 2)

Hildegard Johnson
(Phineas and Ferb)
Add a photo to this gallery
Retrieved from "https://disney.fandom.com/wiki/Vicki_Lawrence?oldid=4470700"
Community content is available under CC-BY-SA unless otherwise noted.