Philip G. Allen (2008-present)
Vicki Lewis is an American film, stage, and TV actress, voice actress, and singer who is best known for her television role as Beth on the NBC sitcom NewsRadio from 1995 to 1999. She also played April Smuntz in a 1997 comedy film, MouseHunt and Dr. Else Chapman the Paleontologist in the 1998 sci-fi film, Godzilla.

Her Disney roles include Beret Girl in An Extremely Goofy Movie, Grace LaSabre in Breakfast of Champions, Mrs. Joy Bitterman in Sonny with a Chance, Lulu in Phineas and Ferb, Deb and Flo in Disney/Pixar's Finding Nemo and Finding Dory, Dina Reams in Den Brother, Arachne in Hercules: The Series and Headmaster Knightslinger in Upside-Down Magic. 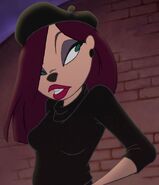 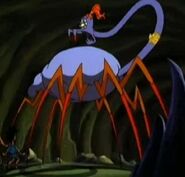 Mrs. Bitterman
(Sonny with a Chance)

Vicki Lewis at the premiere of the Disney Digital 3D re-release of Finding Nemo in September 2012. 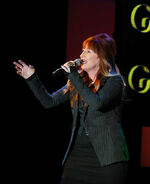 Vicki Lewis performs onstage at the 22nd A Night At Sardi's in Beverly Hills in March 2014.
Community content is available under CC-BY-SA unless otherwise noted.
Advertisement