Victory Through Air Power is a film that was produced during World War II based on a book of the same title by Alexander P. de Seversky that urged the US Government to put more resources into aviation for the war effort. It utilized both live-action and animation.

The popular film maker Walt Disney read the book and felt that its message was so important that he personally financed the animated production of Victory Through Air Power. The film was primarily created to express Seversky’s theories to government officials and the public. Movie critic Richard Schickel says that Disney "pushed the film out in a hurry, even setting aside his distrust of limited animation under the impulses of urgency." (The only obvious use of limited animation, however, is in diagrammatic illustrations of Seversky's talking points. These illustrations often feature continuous flowing streams of iconic aircraft, forming bridges or shields, or war material moving continuously along assembly lines.) It was not until 1945 that Disney was able to pay off his $1.2 million war film deficit.

On July 11, 1943 the New York Times devoted a half page, "Victory from the Air," to a feature consisting of pictures of scenes from the film with short captions. This was possibly the first time that such skilled use of visual description had been placed at the service of an abstract political argument.

It is one thing to hear someone say that against modern bombers, or "combat planes" in this case, "bristling with armament… small single-seater fighters will find themselves helpless, for their guns are not maneuverable—they are fixed and can only fire forward." It is quite another to have this accompanied by vivid animations of swastika-tailed fighters jockeying for position and being shot down by beam-like animated blasts of fire from a bomber whose guns are "always in firing position."

One of the counter-arguments to air-power advocacy was the vastly inferior firepower of aircraft compared with, say, battleships. Seversky implicitly counters this by predicting the appearance of, or advocating the development of a number of advanced weapons that would make air-based weaponry as effective as land- or sea-based weaponry. His depiction how bombs could be used to destroy dams was either prophetic or well-informed. In general, Seversky asserts that bombs carried by aircraft will increase rapidly in size and destructive power. One diagram shows a man standing next to a 2000-pound bomb; they are about equally tall. As the narrator talks, the field of view widens to show 4000, 6000, 8000, and 10000-pound bombs, each taller than the last, ultimately dwarfing the human. (If Seversky had any inkling of the possibility of nuclear weapons, he did not reveal it).

The closing sequence of the film contains some technically impressive animation sequences of airmen scrambling their intercontinental bombers from an Alaskan airfield. They take off under a darkened sky in pouring rain; their landing gear splashes through puddles. A Tlingit totem pole that is (somehow) in the foreground seems to resemble an American eagle. A map shows the destination to be Japan, airmen are seen using navigational instruments, the streets of a city pass beneath the bomb bay doors, and bombs are dropped. There are scenes of dramatic explosions destroying industrial buildings and machines, but, as James Agee commented, no human beings are shown, even in close views of the interiors of levelled factories. The scene then fades into images of the globe of the world with an eagle repeatedly plunging its talons into an octopus, whose body centered on Japan and whose tentacles reach out across nearby territory. After a struggle, the sky clears, the music softens, and the light of a beautiful sunrise shows us a dead octopus and an eagle soaring gracefully. The eagle lands on top of a mast bearing a forty-eight-star American flag, waving realistically in the wind as the movie ends.

On December 8, 1941, Disney studios were essentially converted into a propaganda machine for the United States government. While most World War II films were created for training purposes, films, such as Victory Through Air Power were created to catch the attention of government officials and to build public morale among the U.S. and Allied powers. Among the notables who decided after seeing the film that Seversky and Disney knew what they were talking about were Winston Churchill and Franklin D. Roosevelt.

The Disney studio sent a print for them to view when they were attending the Quebec Conference. According to Leonard Maltin, "it changed FDR's way of thinking; he agreed that Seversky was right." Maltin also adds that "it was only after Roosevelt saw 'Victory Through Air Power' that our country made the commitment to long-range bombing." Roosevelt recognized that film was an effective way to teach and Disney could provide Washington with high quality information. The American people were becoming united and Disney was able to inform them of the situation without presenting excessive chaos, as cartoons often do. The animation was popular among soldiers and was superior to other documentary films and written instructions at the time.

The film played a significant role for the Disney Corporation because it was the true beginning of educational films. The educational films would be, and still are, continually produced and used for the military, schools, and factory instruction. The company learned how to effectively communicate their ideas and efficiently produce the films while introducing the Disney characters to millions of people worldwide. Throughout the rest of the war, Disney characters effectively acted as ambassadors to the world. In addition to Victory Through Air Power, Disney produced Donald Gets Drafted, Education for Death, Der Fuehrer's Face, and various training films for the military, reusing animation from Victory Through Air Power in some of them.

One scene showed a fictional rocket bomb destroying a fortified German submarine pen. According to anecdote, this directly inspired the British to develop a real rocket bomb to attack targets that were heavily protected with thick concrete. Due to its origin, the weapon became known as the Disney bomb, and saw limited use before the war ended. In retrospect, some Seversky's proposals were derided as impractical such as operating a major long range air bombardment campaign from the Aleutians, a series of islands reaching westward from Alaska which is a remote area with a climate that makes for dangerous flying conditions.

After its release and re-release in 1943 and 1944, there was no theatrical release for 60 years, perhaps because it was seen as propaganda, or perhaps because it was deemed offensive to Germans and Japanese. (It was, however, available in 16 mm prints and occasionally screened in film history retrospectives. Additionally, the introductory "history-of-aviation" scene was excerpted in various episodes of the Disney anthology series on TV). In 2004, the Disney Studios released it on DVD as part of a Wartime collection in the Walt Disney Treasures DVD series. Ironically, after the war, Disney's characters, especially Mickey Mouse and Donald Duck, were enthusiastically received in Japan and Germany, where they remain immensely popular today. 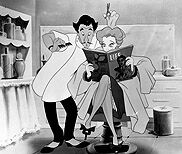