Glow in the Park Halloween Parade

Villains Night Out! was a mini-parade at Hong Kong Disneyland for the Disney Halloween Time Event.[1]

As part of the "Villains After Hours" event at Magic Kingdom, there's a similar mini-parade under the name Villains Cursed Caravan.

The Evil Queen and Jafar lead the nighttime spectacular mini parade, scowling from a great height on all who dare to look. Iago, Pain and Panic, Queen of Hearts, Captain Hook, and Jack Skellington also joined the devilish procession lineup. In 2017, it was updated to Chapter 2, as Ursula, Flotsam and Jetsam, Cruella De Vil, Frollo, and Oogie Boogie joined the parade. In 2018, it was once again updated to Chapter 3, as Maleficent herself joined the parade, performing on the Castle Hub Stage with the "walk on foot" villains.

With the loudest evil laugh of all, Maleficent appears on the walls of Sleeping Beauty Castle (2016-2017) and Main Street, U.S.A. (2017) in projection mapping and morphs into a ferocious dragon, determined to claim it as her own. She invites more villains to join her, such as Big Bad Wolf, Lady Tremaine, Shere Khan, Kaa, Gaston, Scar, Governor Ratcliffe, Sid Phillips, Hades, Shan Yu, Hopper, Randall Boggs, Jackson Storm, Dr. Facilier, Mother Gothel, Si and Am, Yzma, Shenzi, Banzai, and Ed, etc.

As dusk creeps over Shanghai Disneyland, guests are in for an awesomely evil treat when popular Disney Villains descend upon the parade route each night. Hades, Maleficent, and Dr. Facilier herald the spirited spectacle while spreading black magic and mischief along the way. The Shadow Man’s theme song, “Friends on the Other Side”, sets the tone for thrills, chills and an unforgettable time as these 3 fan-favorite fiends pass by. 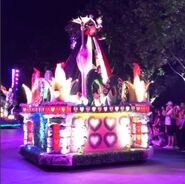 Queen of Hearts float (Shanghai Disneyland, 2018)
Add a photo to this gallery

Retrieved from "https://disney.fandom.com/wiki/Villains_Night_Out!?oldid=4431214"
Community content is available under CC-BY-SA unless otherwise noted.