Hania, Vincent, and Pauline
Mark Sinclair Vincent, better known as Vin Diesel, is an American actor, voice actor, producer, director, and screenwriter who came to prominence in the late 1990s and became best known for his roles as Dominic Toretto in The Fast and the Furious series and Richard B. Riddick in The Chronicles of Riddick film series. He is also the founder of the production companies One Race Films, Tigon Studios, and Racetrack Records.

For Disney, he portrayed Navy S.E.A.L. Shane Wolfe in the 2005 action comedy film, The Pacifier. He also voiced Groot in the 2014 Marvel science-fiction action film, Guardians of the Galaxy, and he reprised this role in Guardians of the Galaxy Vol. 2, Avengers: Infinity War, Ralph Breaks the Internet, and Avengers: Endgame. He was mentioned in Need for Speed, the Liv & Maddie episode "Howl-a-Rooney", the BUNK'D episode Cabin vs. Cabin, the Stuck in the Middle episode "Stuck at the Movies", and the Gamer's Guide to Pretty Much Everything episode "The DJs". 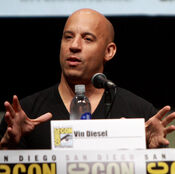 Vin Diesel poses at his Hollywood Walk of Fame ceremony in August 2013.

Vin Diesel next to a Groot statue at Guardians of the Galaxy premiere in July 2014.

Vin Diesel receiving the award for "best actor" during the 2016 People's Choice Awards.

Vin Diesel at premiere of Guardians of the Galaxy: Vol. 2 in April 2017.

Vin Diesel visits Jimmy Kimmel Live in December 2017.
Add a photo to this gallery
Retrieved from "https://disney.fandom.com/wiki/Vin_Diesel?oldid=3853245"
Community content is available under CC-BY-SA unless otherwise noted.