Vincent Price was a popular actor who appeared in many classic horror movies. He was the guest star on episode 119 of The Muppet Show (his appearance helped convince Alice Cooper to appear on the show ([1])

His most notable contribution to Disney is that of the original voice of Ratigan in The Great Mouse Detective.

Vincent Price also provided voice roles as the original narrator and The Phantom in the Phantom Manor ride in Disneyland Paris was later redubbed by French actor, Gérard Chevalier. Vincent Price's voice is still heard as The Phantom's laughter. Price's original recording can be found on The Haunted Mansion - 30th Anniversary released in 1999. If you look at the molding around the front door before you walk in, on the top in the center there is a small 3D molding of Vincent Price still there. He also did the voice for Zig Zag in The Thief and the Cobbler, which happens to be his last film before his death, though it was shot before the earlier released Edward Scissorhands. In 1982, Price performed a sinister monologue on the title track of Michael Jackson's Thriller album. A longer version of the rap, sans the music, along with some conversation can be heard on Jackson's 2001 remastered reissue of the Thriller album.

He was easily recognized by his distinguished voice. 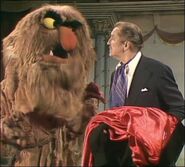 Retrieved from "https://disney.fandom.com/wiki/Vincent_Price?oldid=3943232"
Community content is available under CC-BY-SA unless otherwise noted.