Aside from the opening credits, he first appears in "The Doctor Zone Files" giving pistachios to Milo and Sara at the Doctor Zone Files movie premiere. He happens to be smarter than his partner Balthazar Cavendish, as shown when Balthazar tried to have Sara Murphy pronounce "pistachios" correctly, only for Vinnie to remind that she did that already. He is also aware of his surroundings, as when Balthazar told him not to talk to the customers, only for Vinnie to remind that he was just talking to Balthazar instead of the customers; he even pointed out that he had nothing to do with their pistachio stand blowing sky high after Balthazar accuses him of sabotaging it, as Balthazar accidentally spilled some ingredients that jammed the broiler in the first place. They disappeared after the stand blew up.

He and Cavendish made a cameo in "The Note" and "Party of Peril".

In "Smooth Opera-tor", the duo made an attempt to protect the pistachios at the Opera house by tying up the guy who usually works the concessions stand and leaving him under the stage. He compared the ascot Cavendish was wearing to a lobster bib before Milo came to buy some pistachios. Then they tried to convince him to get gummy bears instead but he wasn't interested. They were forced to comply but struggled to even dispense them. Vinnie managed to release it by accident with his foot and because of Murphy's Law, the other dispensers flooded the floor with pistachios ruining their mission.

In "Worked Day", Dakota was shown being fascinated by a lava lamp in the window of a pawn shop. Throughout the episode, he constantly tries to get Cavendish to agree on where to go for lunch while trying to complete their mission of transporting a pistachio truck to its designated warehouse. Upon seeing Cavendish drive them to a steak sandwich restaurant, he pointed out they were on the wrong B Street. While passing the hospital, their truck was pulled in due to the magnetic pull which stopped the device causing it. Dakota then decided on having hospital food, annoying Cavendish.

The duo were briefly seen in "The Wilder West", manning a pistachio cart in front of the outlet mall.

Dakota and Cavendish have a brief appearance in "Family Vacation" when Milo and the Brulee Family crashes into the building they are currently in. Cavendish blames the accident on Dakota, chalking it up to "that attitude".

In "Murphy's Lard", the duo is seen zapping into existence right by a pistachio stand and pretending to be pistachio stand inspectors sent from "corporate". They went on to question the teenager working at the pistachio stand, called Henry, about the stands capabilities to withstand a flaming pig attack. Cavendish spends the episode setting up a globe shaped defense mechanism around the stand while Dakota eats pistachios and practices different instruments, such as a harmonica, a theremid, and a clarinet. When they manage to successfully stop a flaming pig-shaped ride cart from crashing into the stand, Cavendish begins take down the safety precautions around the pistachios. Just as the duo is about to leave the flaming pig shaped cart is again flung towards the pistachio stand, this time crashing into it and destroying the pistachios within it; at Cavendish's request that Dakota "play him out" he takes up his clarinet and accompanies Henry on a banjo, playing while Cavendish walks away.

The duo is seen shortly in "Secrets and Pies" trying to stop pistachios from leaking out from a silo. When Veronica drives past them with Milo's pizza, the silo begins to leak even more and eventually bursts, causing a pistachio tsunami.

In "The Substitute" the pair are transporting a futuristic fertilizer to a pistachio sapling at Milo's school only for their Quantum Localizer to land them in a science class closet before running out of power. The fertilizer ends up mixing with another chemical to become a sentient blob, which grabs the pair and throws them out into the hallway.

In "Time Out" Dakota and Balthazar end up bothering Brick and Savannah, fellow time travel agents, where it mentioned he and Balthazar are both dressed in cloths "From the '70s" respectively. Dakota also claims that he joined the time travel agency to prevent the "Mississippi Purchase"; when Balthazar questions whether he means the Louisiana Purchase, Dakota responds "You're welcome!"

Dakota appears again in "The Little Engine That Couldn't", where he and Balthazar are assigned to transport two boxes of pistachios using their new vehicle, a tandem bike. Balthazar looks on this as yet another case of being demeaned by his superiors, but is distracted when the bike and pistachios are crushed by a runaway antique fire engine carrying Milo Murphy. Determined to find out who Milo is working for — since he is unaware that Milo isn't working for anyone — he drags Dakota in pursuit of Milo. They briefly interact with Milo and witness him saving a number of cats sent flying by the engine, and Dakota catches one that resembles Balthazar. The cat also demonstrates the tendency to mock him, both before and after the pair are thrown from the engine into a nearby pond. 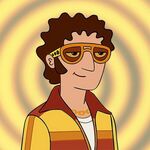