This article is about the character Violet from A.N.T. Farm. For other characters, see Violet.

Violet Ventimillagia is a sports prodigy and a new A.N.T. She has a big crush on Fletcher Quimby. She is a recurring character and is known to have anger issues. She has unmatched strength, which gives her keen talent in sports such as football, baseball, basketball, ice-hockey, lacrosse and formerly ultimate fighting. Violet is mainly known for her quick-temper, dry-wit, and abrasive comments.

Violet has an aggressive, fearless, and blunt exterior. While she harbors her real feelings underneath, particularly her romantic feelings for Fletcher. Though a good person at heart, Violet's bad temper makes her quick to criticize and attack. 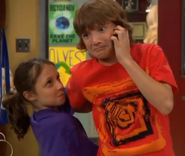 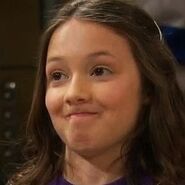 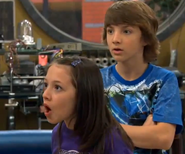 Chyna was the first person to talk to Violet on her first day of the A.N.T. program.

Violet is good friends with Olive (They sang together in "InfANT").

Violet romantically likes Fletcher, he likes her but only as friends instead he likes Chyna. Fletcher is sometimes scared of Violet.

On the first day of school, Violet upsets Lexi and they both ruin the Ballet Show, as seen in "Ballet DANTser". They also competed against each other in curling in "IntelligANT".

Retrieved from "https://disney.fandom.com/wiki/Violet_Ventimillagia?oldid=3260079"
Community content is available under CC-BY-SA unless otherwise noted.