Laurieanne McGhee, Margaret McGhee
Virginia Davis was an American child actress in films. She was the first actress to play Alice in the Alice Comedies.

Virginia Davis began working for Walt Disney's Laugh-O-Gram Films in the summer of 1924. She was hired to act in a film called Alice's Wonderland, which combined live-action with animation. This film initiated a series known as the Alice Comedies, or "Alice In Cartoonland." During this time, Davis resided at the La Brea Apartments in Hollywood, California.

Other Work With Disney

Davis also did voice testing for a role in Snow White as well as some of the little boys' voices in "Pinocchio", but did not go on to play the roles in the final films.

Davis gave up acting after the "Alice" films concluded with "Alice In The Jungle" (1925). By 1934, she was performing as a dancer. She had an uncredited role as a dancer in College Holiday (1936).

In 2005, Davis was interviewed by Leonard Maltin for the Walt Disney Treasures.

Davis made a rare appearance at the annual Mid-Atlantic Nostalgia Convention in September 2007.

Virginia Davis-McGhee died of natural causes in Corona, California, at the age of 90. 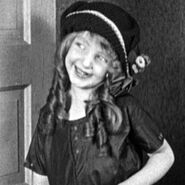