Virtual Magic Kingdom, also known as VMK, was a massively multiplayer online game by Disney, created as part of the Happiest Homecoming on Earth promotion, in celebration of Disneyland's 50th anniversary. The beta version was released on May 23, 2005. The lands online at the time of launch were Main Street, USA, Adventureland, and Fantasyland, while Tomorrowland, Frontierland, and New Orleans Square opened later. It was in operation daily between 10:00am and 1:00am EST. It shut down on May 21, 2008.

In the game, players could chat and play together in a virtual version of Disneyland.

The game was developed by Sulake Corporation with Macromedia Shockwave.

A new player began the game by registering an account at VMK.com. The player then set up a character (an avatar) and selected the character's gender and appearance (shirt, shoes, pants, hair, hat, face, and colors for skin and hair). The player typed in a name, but until the VMK staff approved the name they requested, their name would be Guest, followed by the number of player that they are (E.x. Guest7402548). If the name was not approved the VMK staff would let them create another name.

A player could also choose from a list of randomly-selected adjective-adjective-noun names presented to him or her; if he chose one of these names, it required no approval from VMK staff.

The player also selected a "guest room", his or her own themed area which could be decorated with furniture, posters, game items, or other material. One room was provided for free, and additional rooms could be purchased later with in-game credits.

The player could enter a few lines of text, known as a "(signature)", which would be displayed in the character's publicly-visible profile. The character was then given a few tradeable items (mostly T-shirts), and was placed in the game.

Disneyland and Magic Kingdom visitors were able to create accounts at special VMK kiosks located in those parks.

The following minigames were available to play throughout the lands in the Virtual Magic Kingdom:

Members could create their own games in their guest rooms, such as mazes, races, "falling furniture," and trivia game shows.

In VMK, you could purchase furniture and posters for your guest room, and pins to trade with other members. For a list of all the items DisneyWiki members have found, go to List of VMK items.

Most items were found in shops. There were six shops in the game:

Magic Pins were pins that players could buy in shops, win from games or events. For a list of all the items DisneyWiki members have found, go to List of VMK pins. 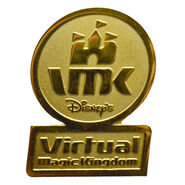