At Propwash Junction, an air show called the Vitaminamulch Air Spectacular is being hosted by Leadbottom, who is selling Vitaminamulch to the people who attended, including Roper and his delivery truck Willy Knight. Dusty Crophopper is congratulated by Skipper and Dottie on his act in the show, which is planning to have two stuntmen, named Air Devil Jones and Vandemonium, take part.

Dusty and Chug are excited about this, but get informed by Leadbottom and Sparky that the two daredevils cannot come because they got fogged in. This leaves Leadbottom concerned, making him predict that the crowd, who are wanting to see Air Devil Jones and Vandemonium, would get unhappy if they hear the news, and the products would not get sold to the major fertilizer distributors, who have also attended. However, an idea is given to Leadbottom to have Dusty and Chug disguised as Air Devil Jones and Vandemonium after comparing them with the daredevils on a poster.

Leadbottom then continues announcing to the crowd, who now do not look excited when they see Dusty and Chug in disguise. Still not impressed as the act begins, the crowd starts to leave. Trying to make the show continue, Dusty makes the loop-de-loop that Air Devil Jones does in his acts, and gets ready to land onto a platform on top of Chug, like Jones does with Vandemonium. However, it does not go exactly as planned, when Dusty slips off the platform upon hearing Chug mention that he has fuel that is highly flammable. Chug is able to catch him with his crane arm, before stopping just in time at the end of the runway.

Thinking that what they are seeing is a rip-off, the crowd begins to boo and throw bags of Vitaminamulch at Leadbottom. However, mayhem starts when one of the bags is thrown onto the runway, causing Chug to skid into Sparky, who was holding some balloons that then float up in front of Dusty and get caught on him. Chug gets going again, unaware that Sparky is on him from behind. After getting his fork unstuck through a hole in Chug's fuel tank, Sparky tries to stop the fuel from leaking out, but it squirts into his face, causing him to fall off and press against the ground. A spark from the friction then lights the trail of fuel, shocking Sparky as he is pulled along by an attached bunting. Chug finally notices the problem when he is informed by Dusty, who was also having a problem with moving one of his ailerons, which had a balloon string stuck around it.

Not being told about any flames, the crowd starts to become interested, and come back to their seats to watch. Noticing that he is heading towards the inflatable Corny balloon, Chug makes a turn and stops, noticing Sparky and greets him, but quickly reverses when noticing the fuel trail still lit. While they both struggle to blow the flames out, the Corny balloon gets pushed along, before it then deflates and lands in front of Chug's eyes. Struggling to see, he gets instructions from Dusty to go port then starboard, but is not able to know what starboard means as he breaks through some of the runway lights. After being told to turn right, Chug turns around, and the flames light the fuses of some fireworks, which then launch into the air and explode in Dusty's spot.

The balloon finally comes off when Chug's false fang teeth used by Vandemonium get caught on his tire, causing him to react to pain from the teeth hitting his bodywork. One of the lit fireworks then launches while having the Corny balloon over it, before it bursts in the sky, with one of the balloon's pieces blocking the hole to the engine on Dusty's nacelle, which stops his propeller and causes him to fall. Meanwhile, Chug is still being chased by the burning fuel trail, as a box of fireworks near a "Finale" sign then gets picked up by Sparky. The balloon piece finally comes off Dusty, getting himself to fly just before coming toward the ground.

Chug then gets moved along with Dusty when a bunting gets pulled by Dusty's landing gear, before the fuse of the fireworks gets lit by the flames. Heading toward Leadbottom on the stage, the three friends then go up the ramp and into a model of Vitaminamulch in the shape of Leadbottom. The model then gets lifted up into the sky, with Dusty, Chug and Sparky already coming out of it before it then explodes. Everyone then gets covered by pieces of mulch, as Chug then says "Ta-da" quietly before the crowd cheers. Feeling glad with his life saved, Leadbottom thanks Dusty, Chug and Sparky, before mentioning about having them in another show later, which shocks the three entirely. 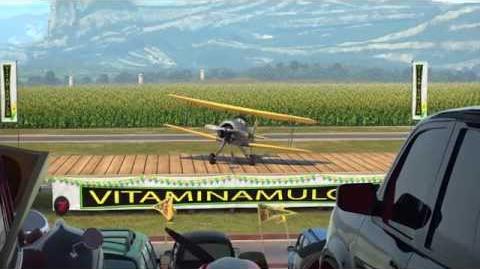