Disney Wiki
Register
Don't have an account?
Sign In
Advertisement
in: Characters, Females, Phineas and Ferb characters,
and 10 more

Vivian Garcia-Shapiro[3] is a recurring character in Phineas and Ferb, voiced by Eileen Galindo. She is Isabella's mom. She enjoys playing in a jazz band with Linda and Jeremy's moms. She lives across the street with Isabella as well as Pinky, and has a rapid way of speaking. 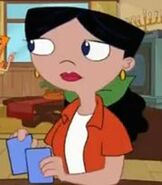