Lives with Tod in the woods.

"I think 6 would be just right."
Vixey (often misspelled as Vixie) is a vixen from Disney's 1981 feature film The Fox and the Hound. She is who Tod falls in love with after being released into the wild. She is much more used to the forest, so it makes sense that she is a step ahead of Tod. When she says, "I think six would be just right," it seems to imply that she is talking about the number of kids she would like to have, but Tod is confused and has no idea what she is talking about. She was voiced by Sandy Duncan and was animated by an uncredited Tim Burton.

Big Mama comes looking for Tod, and finds Vixey, a female vixen of Tod's age, who is clearly good friends with Big Mama. Vixey remarks that he looks downhearted, and Big Mama tells her that "he was dropped out here all alone without a friend in the world". Vixey decides to try to cheer him up, and Big Mama thinks the idea is perfect. Big Mama sets Vixey into the sun light, just so that she will look as beautiful as possible, and introduces Tod to her. Tod first tries to impress Vixey by catching a fish, only to fail, causing Vixey and the other animals of the game preserve to laugh at him. Angry and hurt, Tod tells Vixey that she's "a silly, empty-headed...female!" Angered, they refuse to speak to each other, but Big Mama intervenes with the song "Appreciate the Lady" and directs Tod in being himself, and Vixey to give him another chance. They get along very well once Tod admits his lack of survival skills. Vixey is now aware of his inability to survive in the wild and helps him adapt. This also seems to bring Vixey and Tod closer in a romantic light.

The vengeful Slade and Copper trespass into the preserve and hunt the two foxes. He sets up the leg-hold traps and hides them with leaves. Tod's foot uncovers one, and as Amos gets ready to shoot, a bolt comes unloose, causing Tod to steep backward. Tod narawly escapes the traps, running as fast as he can whilst Amos's gunshots ring out, and Copper and Slade chase Tod and Vixey. Tod tells Vixey to head for the burrow under which they slept the previous night, and climbs a rock, ready to attack Copper. As Copper approaches, Tod jumps from the ledge, growling and snarling with rage at his ex-friend. Copper tries to bite Tod, but Tod bites Copper first. Copper chases Tod into the burrow, and Tod and Vixey attempt to exit out the other end. They then flee once again at the sight of Amos and his gun. Amos takes a match and some straw and burns it, flaming the end of the burrow with his hat, and approaches the other side with Copper, ready to shoot the two foxes. Tod tells Vixey that this is their only chance, and he and Vixey flee the back end without getting flamed, putting Amos into pure shock. Tod and Vixey run over the mountain as Copper and Slade chase them all the way to the top.

In the very last scene of the film, Tod is seen sitting on a cliff with Vixey, watching his friend Copper from afar.

So cute and beautiful
Fish-1-.jpg
"One what? Fish, silly. (giggles)" 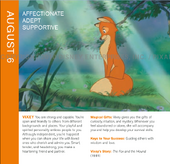 Retrieved from "https://disney.fandom.com/wiki/Vixey?oldid=951883"
Community content is available under CC-BY-SA unless otherwise noted.