The Avengers: Earth's Mightiest Heroes
Avengers Assemble
Hulk and the Agents of S.M.A.S.H.
What If...?

“Do not mistake my appetite for apathy!”
―Volstagg

Volstagg is one of the Warriors Three, known for his endless appetite.

Volstagg was created by Stan Lee and Jack Kirby.

Thousands of years after the war between Asgard and Jotunheim, Odin would give way as King to his son, Thor (very despite the discontent of Loki). However, the ceremony was interrupted by Frost Giants who wanted to retrieve the Casket of Ancient Winters. This intrusion, angered Thor who asked Volstagg to accompany him to Jotunheim and put an end to the cold war between the two races. Volstagg is one of the warriors who accompany Thor to Jotunheim after the Frost Giants' attempted robbery of the Casket of Ancient Winters. Volstagg and others traveled to Jotunheim, even though they thought it was a bad idea. Here, they fought against Jotuns, who quickly surpassed in number and power. Fortunately for them, they were saved by Odin.

He watched as the all-father vanished Thor and send him to Earth. Days later and after Odin falls into Odinsleep, Volstagg and his friends asked Loki to forgive Thor and allowed him to return from his exile. Loki refused this request since for him that would be the wish of his father. As Loki refused, Volstagg and the others Warriors three and Sif traveled to Midgard, even though they knew that it could cause their banishment. Here, they revealed to Thor that his father was not dead, only sleeping, finding out that Loki was behind all this.

Volstagg was present when the Asgardians battled against the Marauders. With the threat of the Marauders finished, Volstagg and the others Asgardians celebrated overnight. After the attack of the dark elves, Volstagg and Fandral informed Odin that their defenses were destroyed during the attack. That same night, Thor summoned his friends to tell them he devised a plan to prevent this from happening again. Thor tells him his plan, which consisted in release Loki from prison. Volstagg says that Loki will try to betray him, Thor says he is aware of that. When Loki is released, he tells Loki that will kill him if he betrays Thor.

Volstagg fight against the Einherjar guards in order to protect Thor and Jane Foster. Finished the battle against the Dark Elves, Volstagg and Sif go to the Collector's Museum, to hand over the Aether because it is dangerous to have two Infinity Stones in one place.

When Hela launches her invasion of Asgard, Volstagg squares off against her and is thus killed by her.

In the episode "Thor the Mighty" a banquet is interrupted by Frost Giants laying siege on Asgard, so Volstagg goes to battle with the other aesir, but not without taking a little food for the way to battle. 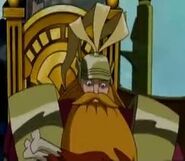 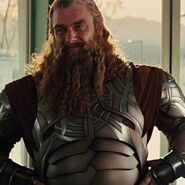 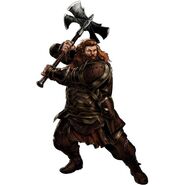