Disney Wiki
Register
Don't have an account?
Sign In
Advertisement
in: Article of the week, Characters, The Incredibles characters,
and 9 more
English

Active
Voyd (real name Karen Fields) is a young "wannabe" superhero who appears in Disney/Pixar's 2018 animated film Incredibles 2. She is part of a group of second-rate Supers who aspire to join the ranks of superheroes.

Voyd's superpower called for some technical intervention to make it easier to achieve in layout animation. The studio wrote software to duplicate characters and connect multiple cameras so that when one looked through one side of the void hole, one would see what a camera at another location sees. If a character reached through the hole on one side, they needed to place a duplicate of the character's arm on the other side.[1]

Because of the banning of Superheroes, Voyd was forced to hide her abilities from the world like all other Supers. Being unable to be herself was hard for her, and when Winston Deavor sets out to make Superheroes legal she gets her chance to embrace her powers. Despite being a powerful girl, Voyd is both eager and nervous about becoming a superhero in Winston's goal to bring them back.

As a fan of Elastigirl, Voyd looks up to her as the one woman in her life who has made her feel hopeful and consider her powers to be a gift and not a curse.[2]

Voyd has light tan skin and a slender figure with magenta lips, turquoise eyes and shoulder-length teal hair in an asymmetrical cut with the longest part covering the right side of her face. Her super-suit is a tight lime and teal leotard with sleeves. The front of her suit has a big indigo "V" with a lime oval in the middle, representing her ability to generate wormholes. The rest of her super-suit includes dark teal green tights and a dark teal eye mask along with matching gloves and boots.

Voyd was invited by Winston Deavor to take part in the growing campaign to legalize supers again. She got to meet her idol, Elastigirl. Being such a fan, she found it hard to contain her excitement and expressed her deep gratitude for what she was doing for her and supers alike. She showed off her ability to create portals and gave Elastigirl a hug.

Soon after Winston's sister, Evelyn revealed her true nature, Voyd was placed under her control with Hypno-goggles along with the other supers, instructed to capture Bob and Helen's children and Frozone, only succeeding in capturing the latter as the children manage to escape with the Incredibile.

Later, she discovers that Violet, Dash, and Jack-Jack had entered the ship, she has a struggle against Violet, whom she tries to place a pair of hypno-goggles onto, but is kicked away and blasted over the railing. Violet, Dash, and Jack-Jack escape and release their parents and Frozone from Evelyn's control. Voyd and the other Wannabe Supers arrive and attack the Incredibles; she goes one-on-one against Elastigirl, who tries to hit Voyd with long-distance punches and kicks, only for the latter to defensively redirect the older superheroine's ranged assaults via her generated portals. Voyd even succeeds on the offensive by catching one of Elastigirl's punches through a portal and then manifesting the exiting one close to her idol, causing Elastigirl to sucker-punch herself. However, Elastigirl then swiftly enacts a counter-tactic to Voyd's portals by veering her punch after it goes inside and exits close to where Voyd is, finally managing to strike the space-warping super. Elastigirl immediately removes the goggles from Voyd, freeing the latter from Evelyn's control. Having regained her mind, Voyd helps Elastigirl board the jet Evelyn is trying to escape on and catches them both in a portal as they fall from the sky.

After Evelyn is arrested, Voyd strikes an applauding conversation with Violet, who apologizes for attacking her on the ship. Voyd is last seen witnessing the reinstatement of the Supers Relocation Program, making supers legal once again.

"Elastigirl! There you are."

"Come on. Get yourself together, Karen!"

Voyd under mind-control by Hypno-Goggles

"The kids have escaped in a tricked-out car, but we got Frozone" 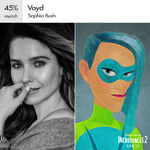 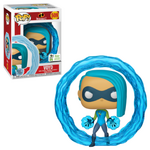 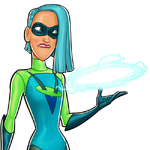