His strength
Vulcan is a minor character in the "Pastoral Symphony" segment of the 1940 film Fantasia.

Vulcan assists Zeus in creating a storm to ruin the party of the creatures on the foothills of Mount Olympus by creating lightning bolts to throw down to the Earth below. When he uses his mallet to hit one, it makes thunder. He puts his tools away when Zeus goes to sleep after a stormy night of mischief. He is not seen again for the rest of the segment. 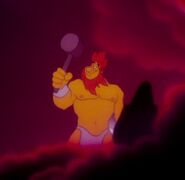 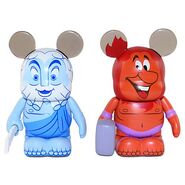