Vulptex (plural: Vulptices) is a crystalline alien fox found on Crait. It appeared in the 2017 film Star Wars: The Last Jedi.

The fox-like vulptex is specifically adapted to its environment by feeding off Crait's mineral surface. This diet has caused the creature's fur to become crystalline like the planet itself.[1] Due to this, its fur can reflect light, producing a bright glow. The vulptex's eyes can also glow in the dark. Vulptices normally run across the salt flats and burrow deep within the planet's crevasses. They inhabit the former hideouts of the Rebel Alliance once stationed on Crait, but they are friendly towards visitors.

Following a narrow escape from the First Order, the remaining Resistance fighters escape to Crait to regroup. Several vulptices are found in the rebel outpost, but they tolerate the presence of the Resistance. While enclosed inside the base during a First Order attack, the vulptices disappear into the caverns. As Finn follows one vulptex, the Resistance discovers the vulptices were using an escape route fit for their size. On the other side of the cave, the vulptices witness Rey's arrival. Their presence alerts Rey that her friends were inside, so she removes the rocks blocking the exit with the Force and gets the Resistance out in time.

The vulptex appears in the Crait expansion on Star Tours: The Adventures Continue. In the simulation, the passengers fly pass a skulk of vulptices on Crait. 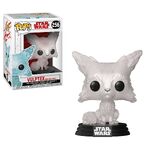