To get a decent meal - any corpse will do (succeeded)

Getting to eat something that's dead

When their food is still alive

Fly down to the Queen's lifeless body to eat it

Snow White and the Seven Dwarves

The vultures are first seen watching the Queen, disguised as an old crone, cackling to herself as she makes her way to the cottage of the Seven Dwarfs. They appear to sense an imminent death, and smiling to each other, quietly follow her. At the cottage, they watch the events from a tree; the animals of the forest notice this and, realizing that Snow White is in danger, try to chase away the Queen; however, Snow White, seeing no danger in her, lets her in the house. The animals fetch the Seven Dwarfs while the Queen succeeds in persuading Snow White to eat the Poisoned Apple. When they arrive to see the Queen leaving their cottage, they pursue her. The vultures hover above her, and, when she reaches the cliff, they land on a branch above her. After she has fallen to her death by the lightning striking the cliff ledge where she is standing while trying to crush the dwarfs with a boulder and saving them from that fate, they fly down. The vultures are last seen swooping down towards where Grimhilde fell to devour the lifeless remains of her (off-screen).

Vultures identical to the Snow White pair make an appearance in the Pecos Bill segment, in the classic role of vultures circling lone travelers in arid American deserts, waiting for them to meet their doom and provide a meal for the birds.

The Vultures appear (via color-tinted archival footage from the 1937 film) in the fourth episode of the first season, Spooks and Magic. They are shown to be the pet birds of "Diller's Midnight Manor", a retirement home for "witches, ghosts, goblins and other death-of-the-party types" opened up by live host Phyllis Diller. Diller quips that while the Security Patrol (made up from the enchanted suits of armor from the climax of Bedknobs and Broomsticks) keeps an eye on the ground, the vultures keep an eye on the Security Patrol.

The vultures appear as audio-animatronics in the dark ride Snow White's Scary Adventures, as well as the Magic Kingdom coaster Seven Dwarfs Mine Train.

The Queen/Witch passing by the two vultures.

They sneer at each other.

The vultures watching the Queen manipulate Snow White at the cottage.

The vultures watch the Queen plummet to her doom.

The vultures swoop down to scavenge the Queen's dead body.

The Vultures in Melody Time 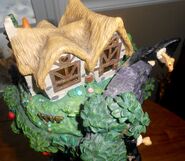 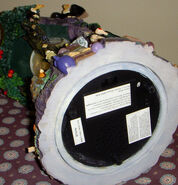 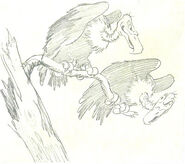 Retrieved from "https://disney.fandom.com/wiki/Vultures_(Snow_White_and_the_Seven_Dwarfs)?oldid=3845984"
Community content is available under CC-BY-SA unless otherwise noted.