WALL-E is a manga adaptation of the 2008 Pixar movie of the same name. It is written by Shiro Shirai and was originally released on December 15, 2008 in Japan and later on April 10, 2018 in the US.

Based on the hit Disney Pixar movie WALL-E.

WALL-E is a trash compactor robot — the last one of his kind! — and every day for hundreds of years he's faithfully cleaned and organized the millions of tons of trash left behind on Earth by humans. But his routine is flipped upside down when he finds a tiny green plant, the first new sign of life for centuries! When the sleek new robot EVE shows up to take the proof of life back to humanity, WALL-E falls head over wheels in love and eagerly follows her across the galaxy into a whole new adventure! 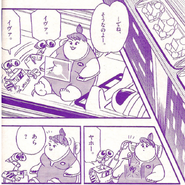 French cover
Add a photo to this gallery

Retrieved from "https://disney.fandom.com/wiki/WALL-E_(manga)?oldid=3900140"
Community content is available under CC-BY-SA unless otherwise noted.