This article is about the video game. For the film, see WALL-E (film).

WALL-E is the video game adaptation of the movie of the same name. The game was developed and published by Play THQ for multiple platforms. The game was released in North America on June 24, 2008, to Europe on July 4, 2008, and Australia on September 4, 2008. The game was also released in Japan on December 11, 2008, although not officially available on the Xbox 360 or any PC.

WALL-E was fairly well reviewed by critics. The game's best received version was the PSP version, which was 64 out of 100 on the Metacritic scale. Though it was highly criticized, IGN praised the PSP adaption as "... one of the most solid film to game adaptations we've seen in a while."

Marc Vulcano was Senior Animation Director for the video game. He had just left Sony Pictures Imageworks where he worked as a Senior Character Animator for films like Beowulf and others. Before he was at Imageworks he worked as an animation director and supervisor for Big Idea Productions's VeggieTales.

The PC version includes demos for the video games Ratatouille and Cars.

The PlayStation 3, Wii, and Xbox 360 versions feature ten explorable worlds. The Microsoft Windows, PlayStation 2, and PlayStation Portable versions feature twenty-seven worlds, and the Nintendo DS features fourteen explorable worlds. The Wii is the only version of the game that features 3 head-to-head multiplayer modes, while the Nintendo DS version feature co-op modes playable as WALL-E or EVE. As the player plays through the levels of the Nintendo DS version, they unlock clips from the movie viewable at any time. The PlayStation 2, PSP and Windows versions allow the player to use music to summon reject bots throughout the game. The story mode seems to be altered; several key scenes are different from the movie, such as WALL-E being able to use his laser, EVE being tasered by AUTO (referenced to WALL-E being tasered in the movie), WALL-E repairing EVE (in the original, EVE tries to repair WALL-E), and WALL-E surviving from getting crushed by the Holo-Detector. 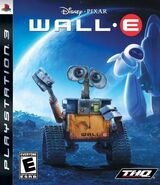 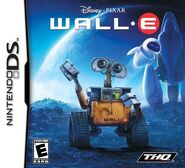 PlayStation 2 version
Add a photo to this gallery

Retrieved from "https://disney.fandom.com/wiki/WALL-E_(video_game)?oldid=3962914"
Community content is available under CC-BY-SA unless otherwise noted.