Dog With a Blog

Actress
Wacky Jackie is a rich actress in Dog With a Blog.

Wack Jackie is an actress who was hired for Stan and Princess' wedding. When she heard of it, she thought it was good "crazy" wedding for her show, which she will fund everything.

Avery and Chloe were watching a video of Wacky Jackie performing various silly stunts on her webshow. She makes an entrance to the house telling everybody to "freak out". Avery then begins to question her sense of humor, thinking she only did it on the internet.

Later, Wacky Jackie is at the wedding with half of the crowd dressed formally (at Avery's request) and the other half like dolls (at Chloe's request). 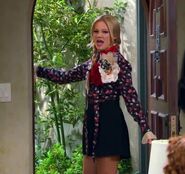