Wai Ching Ho is a Chinese actress. She has acted on television on shows, such as One Life to Live, the Law & Order franchise, Orange Is the New Black, and Awkwafina Is Nora from Queens. She has also appeared in movies, such as Soapdish, Robot Stories, Premium Rush, April Flowers, and Hustlers.

For Disney, she portrayed Chinese Woman in The Sorcerer's Apprentice, Madame Gao in the Marvel Cinematic Universe shows: Daredevil, Iron Fist, and The Defenders, and voiced Grandma Wu in Disney/Pixar's Turning Red. 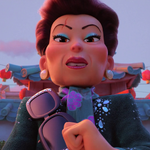