978-0786833429
Walt Disney's Classic Storybook is a hardcover book reprinting various storybooks based on classic Disney productions. The first edition was released in 2001 and was reissued in 2009 and again in 2014 in which some new stories replaced some of the other ones.

Featuring gorgeous vintage artwork from the 1950s and 1960s, Walt Disney's Classic Storybook pays homage to the storybooks of yesteryear. We've taken eighteen of Disney's classic stories—including Sleeping Beauty, Snow White, and Dumbo—and paired them with the stunning and detailed art that was published with these stories decades ago. Parents will recognize this artwork from the beloved Disney storybooks of their youth, and will delight in sharing these timeless treasures with their own children. 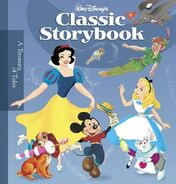 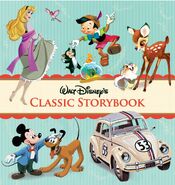 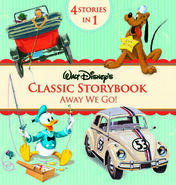 Short four-story version, under the title Walt Disney's Classic Storybook: Away We Go!
Add a photo to this gallery
Retrieved from "https://disney.fandom.com/wiki/Walt_Disney%27s_Classic_Storybook?oldid=4235190"
Community content is available under CC-BY-SA unless otherwise noted.