"The Wonderful World of Color"

Walt Disney's Wonderful World of Color was the iteration of the Walt Disney anthology series that ran on NBC from 1961 to 1969. It was so named because the show had moved to NBC, which was the first television network broadcasting its programs in color, to take advantage of that technology.

Walt Disney's relationship with ABC had soured as the network resisted selling its stake in Disneyland before doing so in 1960. Disney had filmed many of the earlier anthology episodes in color, so they could be re-aired on NBC, along with most of Disney's feature-length films, which were also made in color. The show was renamed Walt Disney's Wonderful World of Color to fully emphasize the addition of color. Its first episode under the new format, "An Adventure in Color/Mathmagicland", dealt with the principles of color, as explained by Ludwig Von Drake (voiced by Paul Frees) in his very first appearance.

Walt Disney died on December 15, 1966, twelve years after the anthology series premiered. While the broadcast three days after his death had a memorial tribute from NBC news anchor Chet Huntley with film and TV star Dick Van Dyke, the intros that Walt had filmed before his death continued to air for the rest of the season. After that, the studio decided that Walt's persona as host was such a key part of the show's appeal to viewers that the host segment was dropped. The series, re-titled The Wonderful World of Disney, in September 1969, continued to get solid ratings, often in the Top 20, until the mid-1970s.

The original format consisted of a balance of theatrical cartoons, live-action features, and informational material. Much of the original informational material was to create awareness for Disneyland. In spite of being essentially ads for the park, entertainment value was emphasized as well to make the shows palatable. Some informational shows were made to promote upcoming studio feature films such as 20,000 Leagues Under the Sea and Darby O'Gill and the Little People. Some programs focused on the art and technology of animation itself.

Later original programs consisted of dramatizations of other historical figures and legends along the lines of the Davy Crockett mini-series. These included Daniel Boone (not the Fess Parker characterization), Texas John Slaughter, Elfego Baca, Francis Marion, the "Swamp Fox", and Kit Carson and the Mountain Man (1977), with Christopher Connelly as Kit Carson, Robert Reed as John C. Fremont, and Gregg Palmer as mountain man Jim Bridger.

Also included were nature and animal programs similar to the True-Life Adventures released in theaters, as well as various dramatic installments which were either one part or two, but sometimes more.

Each week, after the opening titles that showed the entrance to Disneyland itself, and the four main sections of Disneyland, and their descriptive slogans -- Fantasy Land ("the happiest kingdom of them all"), Frontier Land ("tall tales and true, from the legendary past"), Adventure Land, and Tomorrow Land -- one of these lands was identified as the main feature of that evening's program. Naturally "Davy Crockett" and other pioneers of the Old West, and American History generally, appeared in "Frontier Land". Similarly, "Twenty Thousand Leagues Under the Sea" might be the focus of an evening spent in "Adventure Land". But it was also possible to present a documentary on "The Making of Twenty Thousand Leagues Under the Sea" as a topic for "Adventure Land", including only snippets from the actual film. There was much adventure, indeed, in developing working versions of Jules Verne's diving suits, and devising effective ways of filming actors under water, in real tropical seas. The creation of a working model of the giant squid was similarly adventurous, as well as an anticipation of Disney's later animatronics! Topics for "Fantasy Land" could include actual cartoons, and animated films, as well as documentaries on "The Making of ...", such as behind-the-scenes presentation of Peggy Lee singing the duet of the wicked Siamese cats in Lady and the Tramp or the barbershop quartet of lost dogs in the municipal Dog Pound. This might also include snippets from a "True-Life Adventure" documentary on the life and works of beavers and their dam-building. The use of stroboscopic stop-action photography, such as investigating what really happened when a rain-drop fell in a puddle, might appear, as part of a "Fantasy Land" episode, explaining the techniques of cartoon animation. The multi-plane camera used to create the three-dimensional effects of Bambi was another "Fantasy Land" topic. In one episode, four different artists were given the task of drawing the same tree. Each artist used his own preferred ways of drawing, and of imagining a tree. This led to cartoon examples of differently animated trees, as in some of the early Silly Symphonies, and later full-length animated films. "Fantasy Land" was an opportunity for the Disney Studio staff to present cutting-edge science and technology, and to predict possible futures, such as futuristic automobiles, and highways.

This format remained basically unchanged through the 1980s, though new material was scarce in later years.

When the show was revived in 1986, the format was similar to a movie-of-the-week, with family-oriented TV movies from the studio making up much of the material. Theatrical films were also shown, but with the advent of cable television and home video, they were not as popular. The 1997 revival followed this format as well, with rare exceptions. A miniseries entitled Little House on the Prairie ran for several weeks under the TWWOD banner. Incidentally, this ABC revival included some non-Disney family films under the banner, such as 20th Century Fox's The Sound of Music and Warner Bros.' Harry Potter films, as well as television films such as Princess of Thieves from Granada Productions, and the 2001 remake of Brian's Song from Sony Pictures Television. 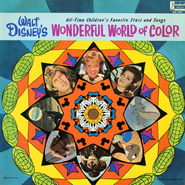 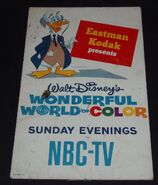