Disney Wiki
Register
Don't have an account?
Sign In
Advertisement
in: Disney on Ice shows, TaleSpin, Darkwing Duck,
and 12 more

Double Feature... Live! (later known as Mickey's Great Adventure, Hooray for Hollywood! and Salute to Hollywood) was the eleventh Walt Disney's World on Ice show, which toured from 1991 to 1997. As the original title suggests, the show features two different stories, with each one taking up the length of the show's two acts. It is also the second Disney on Ice show to incorporate elements from Who Framed Roger Rabbit and TV shows from The Disney Afternoon.

The first act opens on a tropical island off the coast of Cape Suzette, with Mickey, Minnie, Donald, and Goofy arriving by cruise ship to visit their friends Baloo and Louie. They are joined by a fellow passenger, Carolina James, who is searching for her explorer friend, Indiana Andy Jones, who supposedly disappeared on this very island. Mickey and his pals have agreed to help Carolina look for Andy, so Baloo takes her in the Sea Duck for an aerial search while the others look on foot. However, Mickey and friends are soon captured by Don Karnage, who takes them to his secret laboratory. There, his new lab assistants, Igor and Flygor, introduce the group to their shrinking machine. Karnage reveals to the group that he has already used this shrinking machine to shrink Andy to the size of a doll. Just then, he hears the Sea Duck flying overhead and promptly has it shrunken down to the size of a toy plane, but luckily, Baloo and Carolina manage to parachute out of the plane beforehand. Mickey, Minnie, Donald, and Goofy manage to break free from their chains, but are caught in the beam of the shrinking machine. The quartet try to call for help using a telephone that, to them, is so big they have to use a now-giant-sized pencil to dial, but Karnage intercepts them and then swipes them up in his giant hand.

At Louie's Place, Baloo and Carolina inform Louie of what happened when Karnage shows up trying to sell the "dolls". Baloo and Louie send out some French, Cossack, and Flamenco dancers to try and distract Karnage, but they do not garner his attention long enough for them to grab their shrunken friends. Eventually, Baloo, taking a cue from the movie he originally appeared in, dresses up as a lady to get Karnage's attention and then pummels him into submission. However, even though the shrunken group is now safe, there is still the matter of returning them to normal. Fortunately, Gyro Gearloose shows up with his Puffer-Upper machine, which restores Andy, Mickey, Minnie, Goofy, and Donald to their normal sizes.

Roger Rabbit appears to host the second act, a series of mini-vignettes featured through his "Super-Duper-Never-a-Blooper" Video Variety Machine. The first vignette he shows us is set in a western town that is being robbed by the Baddie Brothers. Fortunately, hope arrives in the form of Chip and Dale, the Lone Chipmunks. Despite none of the townspeople being brave enough to help them, Chip and Dale manage to take down the Baddie Brothers themselves.

The next segment shifts to St. Canard, where a gangster by the name of Ice-Head Harry wants to win the heart of the lovely dancer Dazzles (played by Daisy Duck). Ice-Head has his Hoods steal the Diamond of Love so he can present it as a gift to Dazzles. Dazzles, however, refuses his offer, saying "you know my heart belongs to another" (likely referring to Donald). Furious at the rejection, Ice-Head has her tied to a keg of dynamite. Fortunately, Launchpad McQuack happened to be nearby at the moment, and Dazzles' backup dancers plead for him to call on someone who can save the day. Sure enough, Darkwing Duck shows up to rescue Dazzles while the cops arrest Ice-Head and his Hoods.

Before Roger can show another adventure on the Video Variety Machine, it overheats and blows up, but the rabbit is not going to let the show end on a whimper. He decides to produce his own music video with some help from the audience. He directs an astounding musical finale, during which all the other characters in the show join in.

This version drops elements from The Disney Afternoon. So, after 1993, the Darkwing Duck scene is taken over by Donald as a detective who rescues Daisy; and in 1994, the TaleSpin section is rethemed to The Jungle Book where Baloo and King Louie demonstrate Mickey's career in the Island of Memories (with the scenes originally seen in Mickey's Diamond Jubilee). Pluto also joins in the finale.

Indiana Andy Jones is a parody of Indiana Jones, a character who would go on to be acquired by Disney. 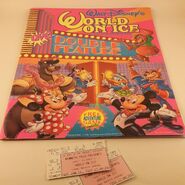