Before Disney began releasing home video titles itself, it licensed some titles to MCA Discovision for their newly-developed disc format, later called Laserdisc. According to the Blam Entertainment Group website, </ref> which has extensive details of DiscoVision releases, only seven Disney titles were actually released on DiscoVision. One of these was the feature film Kidnapped, priced at $15.95. The others were compilations of Disney shorts at $9.95 each. The first titles were released in 1978 including On Vacation with Mickey Mouse and Friends (#D61-503). This title and the other animated releases all had running times of 46 or 47 minutes and originally were episodes of the Disney television show. According to Blam, the other six titles were Kids is Kids (#D61-504), At Home with Donald Duck (#D61-505), Adventures of Chip 'n' Dale (#D61-506), and finally The Coyote's Lament (#D61-507) which was released in May 1979. Disney's agreement with MCA ended in December 1981.

In 1980, Disney established its own video distribution operation as part of Walt Disney Telecommunications and Non-Theatrical Company (WDTNT) with Jim Jimirro as its first president. Home video was not considered to be a major market by Disney at the time. WDTNT also handled the marketing of other miscellaneous ancillary items such as short 8 mm films for home use.

First releases on Beta and VHS

No new titles were released for half a year after Mary Poppins, but Walt Disney Home Video announced an expanded program for "Authorized Rental Dealers" in December 1980 and it began to expand its dealer network during the first part of 1981. For a fee of about $65 to Disney, retailers were able to get a 13-week license to rent a videocassette to consumers at whatever price they could get. From January 1 to March 31, 1981, Disney had a "License One & Get One Free" promotion to encourage dealers to sign up. They also offered free rental use of a 7-minute Mickey Mouse Disco videocassette for customers who rented any title from an Authorized Rental Dealer from February through May 1981.

Disney was unusual among the major studios in offering a program for authorized rentals. Most of the other studios involved in the videocassette market at the time were trying to find ways to stop dealers from renting out their movie tapes. Magnetic Video (with titles from 20th Century Fox and others) ceased doing business with Fotomat after Fotomat began renting Magnetic Video cassettes without authorization. Disney's rental cassettes in blue cases looked completely different from sale cassettes, which were in white cases. This was designed to make it easy for Disney representatives to tell if dealers were violating their dealer agreements by renting out cassettes intended for sale.

The first of the Disney animated features canon to be released on videocassette was Dumbo on June 28, 1981, for rental only. The Many Adventures of Winnie the Pooh was released for sale at the same time. Alice in Wonderland was released on October 15, 1981, for rental only. This was when all the classic Disney films where available on VHS in the early 80's, before then they were on laserdisc and super8mm reels in the 40's-70's. Walt's films had always influenced audiences throughout the years and he claimed that he wanted them to experience the magic of Disney at home on their TV. Disney re-releases at theaters were for 6 years the most to celebrate their anniversary. After they stopped showing, they would rebroadcast on television at Christmas.

Their agreement with DiscoVision having ended in 1981, Disney began releasing Laserdiscs under the Walt Disney Home Video label to their own network of distributors and dealers. The first five titles were shipped in June 1982: The Black Hole, The Love Bug, Escape to Witch Mountain, The Many Adventures of Winnie the Pooh, and Mickey Mouse and Donald Duck Cartoons, Collection One. Five more titles shipped in July: Pete's Dragon, Dumbo, Davy Crockett and the River Pirates, The One and Only, Genuine, Original Family Band, and Mickey Mouse and Donald Duck Cartoons, Collection Two.

Dumbo was released for sale on tape ($84.95) in summer 1982, while Alice in Wonderland (also $84.95) was released for sale in November 1982. The next major animated feature to be released (excluding the "package" anthology features) was Robin Hood on December 6, 1984 ($79.95), starting the Walt Disney Classics collection. By 1982, all the video releases were for sale and rental, along with newer releases, but at high prices.

July 16, 1985 saw the home video premiere of Pinocchio ($79.95). After the price was lowered to $29.95 in late 1985 to encourage more consumer sales, Pinocchio became the bestselling video of that year. The prices on other videos available at the time had their price reduced to $29.95 as well.

Disney DVD is the brand name under which Buena Vista Home Entertainment releases its Disney-branded motion pictures. In the late 1990s Disney began releasing titles on DVD, with VHS releases phased after Bambi II in 2006 (for non-exclusive releases) and Cars in 2007 (for Disney Movie Club exclusives).

The Platinum Editions are a line of special edition DVDs released by Disney. Originally, the line was comprised of the company's ten best-selling VHS titles and would be released in October of each year. Snow White and the Seven Dwarfs was the first film to receive this honor in 2001. The two following titles, Beauty and the Beast and The Lion King were released into IMAX theaters during the holiday season before its October DVD release. Due to underperforming box office results, this tradition was terminated after Aladdin. In May 2003, Disney announced that they would be adding the next four best-selling titles to the collection. Starting in 2005, a Platinum Edition was released in October and February/March. Another tradition practiced for these released are gift sets. These gift sets contain supplements such as original animation sketches, a film frame, and a companion's book. The current list of Platinum Editions includes: Snow White and the Seven Dwarfs, Beauty and the Beast, The Lion King, Aladdin, Bambi, Cinderella, Lady and the Tramp, The Little Mermaid, Peter Pan and The Jungle Book, which was released in October 2007. The original plan for the Platinum Editions was that they would be released ten years after they are put in the Disney Vault. Since then, this time has been shortened to seven years. 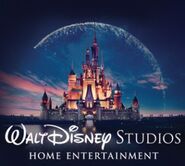 Retrieved from "https://disney.fandom.com/wiki/Walt_Disney_Home_Entertainment?oldid=4303799"
Community content is available under CC-BY-SA unless otherwise noted.