The Walt Disney Masterpiece Collection (Walt Disney Coleccion Maestra in Spanish and Collection Chefs-d'œuvre de Walt Disney in French-Canadian) was a line of VHS tapes and Laserdiscs released by Walt Disney Home Video from 1994 to 1999, 2017. Similar to the Walt Disney Classics line that preceded it, it consisted mainly of Disney Animated Features, along with a few live-action/animated hybrid films. Spanish versions were also released.

Of note, the series featured the first home video releases of Snow White and the Seven Dwarfs, The Lion King, Pocahontas, The Aristocats, Oliver & Company, The Hunchback of Notre Dame, Hercules, Melody Time, One Hundred and One Dalmatians, The Black Cauldron, The Fox and the Hound and Mulan. 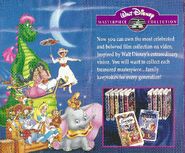 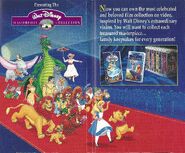