There are 13 playable racers including:

† Initially unplayable †† Appears outside of game

Racing vehicles vary depending on the track. There are, for example, logs at Splash Mountain, locomotives at Big Thunder Mountain Railroad, "Doom Buggies" at the Haunted Mansion, and Time Rovers at DINOSAUR.

Jiminy Cricket greets the player and tells a story that he hopes is "sure to make you smile". One morning, Chip and Dale are out gathering acorns in the Magic Kingdom when they discover a small door in the side of Cinderella Castle. After going through the door, they discover the Walt Disney World Magic Machine, a contraption that shoots firework shows every night. When they get close to it, Dale accidentally drops some of the acorns he collected into it, causing it to stop functioning. They run for cover as it explodes, scattering several pieces across the resort. With the help of several park visitors, they race across the resort to find the pieces and reassemble the machine before the show starts that night.

Jiminy is a courteous, gentle storyteller who loves to tell jokes and sing songs. He’s also the most knowledgeable when it comes to racing and Walt Disney World. He taught Chip and Dale everything they know about both. But watch out if he ever ends up behind the steering wheel, because he knows the best routes to use, and every track is his specialty.

Chip and Dale often race around Walt Disney World collecting nuts for the winter. Now they must collect the Fireworks Machine pieces before the end of the day! Chip is smart and practical, and he uses his brains whenever he races. So be careful, or Chip will sneak past you faster than you can say “acorn”. Dale enjoys life to the fullest, and doesn’t take anything seriously. And though he is a bit scatterbrained, he somehow manages always to be near first place at the end of a race. Call it blind luck or a charmed life, either way Dale is always a force to be reckoned with on the racetrack.

Amanda is the most famous, cutest child actress in the world. It’s no surprise that she absolutely loves being recognized at the Disney Studios. Where else can she continue to work and still have tons of fun on her days off the movie set? She is always sweet and nice and cute...unless she’s behind the wheel! When Amanda is in the driver’s seat, she doesn’t get upstaged! She races to win!

Here’s one girl who has a hard time acting her age! Normally a 13-year old would relate to the Disney Princesses, but alas, she does not. She feels as though the Disney Villains have been hard done by, and that includes her friend, Baron Karlott. This “Queen” is going to make sure everyone else feels the same way...by beating all the racers to the finish line!

Root'n Toot'n Sheriff'n is what he wants to do. He’s spent many a day trying to keep Bruno Biggs under control! This kid mostly moseys around at Big Thunder Mountain Railroad, where the West is still Wild. Moe saunters around at a snail’s pace, but there’s nothing slow about the way he drives!

Otto has spent most of his short life around cars and experiments. It’s a no-brainer to think he would be attracted to Test Track at Epcot. But he’s no crash dummy; he’s one of the smartest kids around. And the rest of the gang love him ‘coz he helps them fix their vehicles! He is the classic educated techie-nerd. Word is he soups up his cars so he can’t lose! Keep an eye on him!

Bruno is a huge fan of the world’s most famous mouse. The more he’s at Walt Disney World, the closer he can be to Mickey. He’s big, and mean, and tough. Don’t mess with him! Bruno is impatient and doesn’t like people getting in his way...especially on the Rock ‘n’ Roller Coaster, his favorite attraction.

Polly dreams of action and adventure. Captaining her own Spanish galleon and searching for buried treasure is all she can think about. But for now Walt Disney World and history books are her escape. That’s why Polly is an expert at navigating the mysterious waterways of the Pirates of the Caribbean.

Baron is a modern day descendant of the famous Karlott bloodline. He continually strives to keep his ancestors happy, otherwise they come and visit...from the grave. That is why he feels right at home in the Haunted Mansion, and also why he drives with such a “grave” purpose.

The son of a famous explorer and paleontologist, Oliver is proud to walk in his father’s shoes - even though they are a few sizes too big. He figured out that the perfect place to get started on his quest was Animal Kingdom. Oliver is very soft spoken and drives very carefully. But watch out! He may sneak past you on the back straightaways if you aren’t careful!

Ned surfs. Ned skates. Ned snowboards. Ned blades. He basically is an all-round cool dude. Ned also likes showing off his moves for Amanda Sparkle! The only other thing Ned likes just as much as shredding is chilling at Blizzard Beach and Typhoon Lagoon. Ned is the classic beach bum, but there’s nothin’ laid back about his driving style...it’s all out!

This Xperimental Utility Duck was built to test out all the attractions at Walt Disney World. Unfortunately, he’s been bounced around and hit in the head a little too much. He prefers to stay in the world of Space Mountain because that’s where he gets his biggest charge. But when he’s out of his element, watch out for his driving...he’s wild, out of control and all over the place!

The soundtrack features authentic Disney music from the attractions, with the exception of Space Mountain, which features music from the Disneyland version, and the Rock 'n' Roller Coaster, which does not feature Aerosmith as the actual attraction does.

Interestingly, the soundtrack contains at least three holdovers from past Crystal Dynamics games. The music for DINOSAUR is lifted from the Prehistory Channel level of Gex: Enter the Gecko. The music for Blizzard Beach is lifted from Gex 3: Deep Cover Gecko, albeit with the portion containing the Gex 3 theme replaced by a section of "Tis the Season to be Jolly". Lastly, the music for the Rock 'n' Roller Coaster is derived from Total Eclipse’s Aqueous Major, the first level in the game. All of these games have been released on the PlayStation (Total Eclipse was released as "Total Eclipse: Turbo"), a console which it is also on. 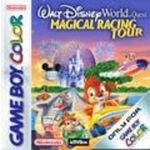 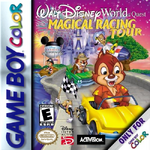 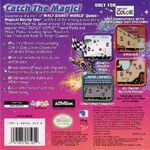 Otto Plugnut in a teacup

On the platforms: XUD, Bruno and Chip

Ned and his snowmobile

Results from a race where Chip is in 1st

Results from a race where Chip is in 1st and Dale is in 2nd.
Add a photo to this gallery

Concept art
Add a photo to this gallery
Retrieved from "https://disney.fandom.com/wiki/Walt_Disney_World_Quest:_Magical_Racing_Tour?oldid=4381223"
Community content is available under CC-BY-SA unless otherwise noted.