The Walt Disney World Swan is a resort hotel designed by architect Michael Graves located between Epcot and Disney's Hollywood Studios behind Disney's BoardWalk Resort and across from its sister resort, the Walt Disney World Dolphin. The Swan, which opened January 13, 1990 on Disney property, is not owned by the Walt Disney Company, but is instead owned by Tishman Hotel Corporation and operated by Starwood Hotels & Resorts Worldwide under the Westin brand.

The Dolphin and Swan (often referred to collectively as the "Swolphin" by guests) share similar elements, but each has a distinctive appearance. The Swan's main structure is a 12-story rectangular main structure with a gently arching top and two 7-story wings on the Dolphin side. The main structure is crowned with two tall swan statues. The colored facade is adorned with turquoise waves similar to the Dolphin's banana-leaf motif.

In 2008, the Walt Disney Swan Resort was awarded a One Palm Designation through the Florida Green Lodging Program established by the Florida Department of Environmental Protection. The Florida Green Lodging Program is a voluntary state initiative that provides the lodging industry with free technical assistance, encouraging hotels and motels to adopt cost-saving “green” practices that reduce waste, conserve natural resources and improve the bottom line.

In the late 1980s, Disney saw that they were losing business to area hotels that catered to conventions and large meetings, so Michael Eisner decided to build a convention-oriented hotel near Epcot. The Tishman Group, the contractor who was hired to build Epcot and who also had hotels in the nearby Disney hotel zone, claimed that the Epcot deal gave them exclusive rights to operate convention hotels on the Disney property. So Disney partnered with Tishman to develop the Swan and Dolphin complex. Eisner had used Graves for other company projects and wanted to continue to build striking, unique buildings.

Tishman owns the buildings, but has a 99-year lease on the land from Disney. Disney also receives a share of the hotel's revenues, and has a say in any design or architecture changes to the interior or exterior of the buildings.

The Walt Disney World Swan Resort is located near many Disney hotspots and hotels. Walking paths are available from the resort to both Epcot and Disney's Hollywood Studios. The resort is located a short walk away from the Walt Disney World Dolphin Resort, Disney's Yacht and Beach Club, and Disney's Boardwalk Resort. These hotels provide a vast array of fine dining and entertainment experiences.

The resort, along with the Walt Disney World Dolphin Resort, has two lap pools and one grotto pool with a waterslide and waterfall. Drinks can be ordered by guests near the pools through a near by cabana bar. Residents have access to a spa, arcade, day care program, along with multiple gift shops.

Swan guests have complimentary transportation to all Walt Disney World theme parks and attractions. Length-of-stay passes are available, as is package delivery from shops across the resort. Swan guests can also use Extra Magic Hours at certain theme parks on certain days. However, room charging (using hotel key as a credit card at Walt Disney World) is not available and hotel restaurants do not participate in any Disney dining plans or discounts. Also, guests staying at the Swan & Dolphin have parking, boat, and Walt Disney World Bus privileges. 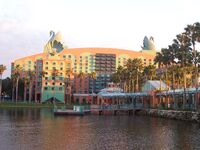