Alwyn Walter "Walt" Peregoy (November 17, 1925 - January 16, 2015) was an American artist who was a color stylist and background artist in animated cartoons. Among the studios he worked at were Walt Disney Productions (1951-1964, 1974–1983), Format Films, and Hanna-Barbera (1968-1971 & 1973). He has received little publicity over his career, but has been acclaimed for his avant-garde style. His dedication, creativity, and contributions to animation while at Disney earned Peregoy the honor of being inducted into the Disney Legends roster in 2008.

Peregoy was born in Los Angeles, California in 1925, he spent his early childhood on a small island (Alameda, California) in San Francisco Bay. He was nine years old when he began his formal art training by attending classes at the California College of Arts and Crafts in Berkeley, California. At the age 12 years old, Peregoy's family returned to Los Angeles, where he enrolled in Chouinard Art Institute's life drawing classes. At the age 17 Peregoy dropped out of high school and went to work for Disney as an in-betweener.

In 1942, he joined the U.S. Coast Guard and served for three years in the Infirmary as a 1st Class Petty Officer. After World War II he continued his art education, studying at the University de Belles Artes, San Miguel de Allende in Guanajuato, Mexico, and with Fernand Léger in Paris.

In 1951 Peregoy returned to the United States and resumed his career with The Walt Disney Studios. Initially serving as a designer and animator on Peter Pan (1952) and Lady and the Tramp (1955). Although skilled with these more conventional projects, Peregoy's personal style began to surface. Peregoy's unique style began to meshed well with that of his contemporary, stylist Eyvind Earle. Peregoy and Earle's work on Paul Bunyan (1958) was nominated for an Academy Award in the short category. Their unique style of animation on Paul Bunyan was a departure for Disney. Peregoy continued to work at Disney for an additional 14 years.

Peregoy was lead background painter on Sleeping Beauty (1959) before embarking on the most ambitious, intelligent, and personal effort to date, his work as colour stylist and background artist on One Hundred and One Dalmatians (1961).

Peregoy continued at Disney, working on such features as The Sword in the Stone (1963), Mary Poppins (1964) and finally The Jungle Book (1967), after which he had a brief stint at Format Films. Then, he spent several years at Hanna-Barbera.

He returned to Disney (WED Enterprises in 1977 thru 1983), contributing his unique view to the design of Epcot Center in Florida, where he influence included architectural facades, sculptures, fountains, show rides, and murals for The Land and Journey Into Imagination pavilions.

Along with Marc Davis, Eyvind Earle, and Joshua Meador, Peregoy was one of the featured artists in Disney's Four Artists Paint One Tree documentary. This documentary illustrated the unique interpretation that each artist can bring to a single subject matter.

He taught Background Styling at Brandes Art Institute from 1984-1985 as well as Principle of Drawing. In the last years of his life, he continued to draw and paint in the Los Angeles area. 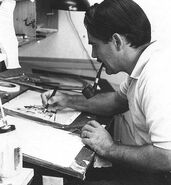 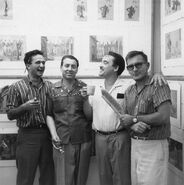 Retrieved from "https://disney.fandom.com/wiki/Walter_Peregoy?oldid=3521114"
Community content is available under CC-BY-SA unless otherwise noted.