Wanda Sykes is an American writer, comedian, actress, and voice artist, who is best known for voicing characters in animated films, such as Stella the skunk in DreamWorks' Over the Hedge, Bessie the Cow in Barnyard and its spin-off TV series, and Sid's Granny in the Ice Age franchise. She is also well-known for voicing the Sofa Queen in the Fox animated sitcom Bob's Burgers and the Witch in Nickelodeon's Bubble Guppies.

For Disney, she voiced Innoko in Brother Bear 2. She also played Daphne Lido in the ABC TV show, Black-ish, and voiced Shirley B. Awesome in Penn Zero: Part-Time Hero and Thea in Doc McStuffins. In 2011, Sykes was signed on to appear in The Muppets as Officer Ethel, interrogating the detained Muppet gang, but her scenes were cut. She currently voices Gregoria in Vampirina. 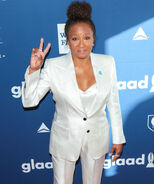 Wanda Sykes speaks at the Visible: Out On Television at the 2020 Winter TCA Tour.
Community content is available under CC-BY-SA unless otherwise noted.
Advertisement