Still standing
Wandering Oaken's Trading Post and Sauna is a place where Anna goes to get winter clothing and meets Kristoff. It's owned by Oaken.

As Anna journeys out in the mountains searching for Elsa, she finds the trading post and goes inside to buy some comfortable winter clothing. Inside, Kristoff enters and the two eventually meet. The seemingly happy and calm Oaken is angered at Kristoff after he calls him a "crook," and kicks Kristoff out of the store before returning to his usual self. Anna then gets the idea to have him guide her to the North Mountain in finding Elsa.

A customer family in the Sauna.

A mickey plush is seen on one of Oaken's shelves. 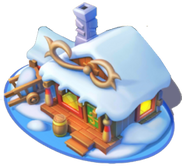 In Disney Magic Kingdoms.
Add a photo to this gallery

Retrieved from "https://disney.fandom.com/wiki/Wandering_Oaken%27s_Trading_Post_and_Sauna?oldid=3976601"
Community content is available under CC-BY-SA unless otherwise noted.