Muscular, black jacket, dark brown hair with red streaks in the left side

Becomes friends with Will Stronghold

Warren Peace is a major character in Sky High, and Will Stronghold's former "arch-nemesis". He is a very feared student in the school, mostly because due to the fact that his father, Baron Battle, was a supervillain while his mother (whose name is never revealed) was a superheroine. Since Will's arrival, Warren followed him closely to avenge his father's arrest by The Commander's (Will's father) hands.

Warren is already a feared student when the film begins. He continuously gives Will cold looks before bursting out on him when Will accidentally throws a tray of food on him. Their fight causes Will to tap into his previously dormant power of super-strength and a battle ensues in the cafeteria, almost destroying it. They were both thrown to detention, where their powers are neutralized.

Ethan and Zach accept Lash and Speed's challenge in Save the Citizen in Will's place, and Warren is forced to partner with Will. Lash wraps himself around Warren, only to be burned. Towards the end of the game, Speed creates an oxygen-sucking vortex around Warren, preventing him from creating his fire and nearly suffocating him. Will stops Speed and throws Warren at the citizen, winning them the game. But his hostility towards Will continues. That night, he meets Layla at the Paper Lantern where he works as a part-timer, and the two begin to form a friendship. Despite him being Will's enemy, he advises her to confess her romantic feelings to him and ask him to homecoming. When that fails, she asks him to be her date at homecoming to make Will jealous. He reluctantly agrees, but refuses to rent a tux. Afterwards, Layla, Ethan, Zach, and Magenta begin to hang out with him at school, much to his dismay.

On the night before the dance, he runs into Will at the Paper Lantern and tells him about Layla's true feelings, though he also takes delight in pointing out that he was being a jerk to his friends, so he does deserve getting the silent treatment from them. At homecoming, he uses his father's tux and meets Layla. When Gwen reveals herself as Royal Pain and turns nearly everyone at the party into babies, Warren opens an escape in the vent for himself and the other four. He later fights Speed, who uses super-speed to evade his attacks. With Ethan's help, he manages to send Speed into the wall with his fireball. After everyone is saved, he is seen being courted by a girl who controls ice. In the ending sequence, Will comments that Warren becomes his best friend and a part of their own superhero team.

Warren is one of the more complex people in the film. He can speak Chinese, with no explanation where he picked it up. He helped other students escape the Homecoming Ball when Royal Pain revealed herself, showing that he was concerned for the other students' welfare. 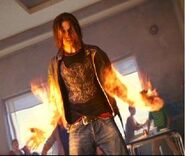 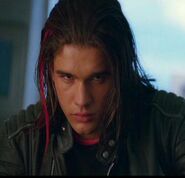 Warren and his friends in the epilogue.
Add a photo to this gallery

Retrieved from "https://disney.fandom.com/wiki/Warren_Peace?oldid=4060262"
Community content is available under CC-BY-SA unless otherwise noted.