Still standing
Wartwood Swamp is a local charted town in Amphibia, populated by anthropomorphic amphibians. Unlike many cities on Earth, this place is not technologically advanced and instead uses traditional methods such as mushrooms for lights and is somewhat more similar to the Middle Ages. 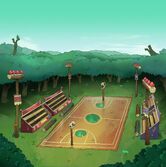 Historic Wartwood Town Archives
Add a photo to this gallery

Retrieved from "https://disney.fandom.com/wiki/Wartwood_Swamp?oldid=4302815"
Community content is available under CC-BY-SA unless otherwise noted.